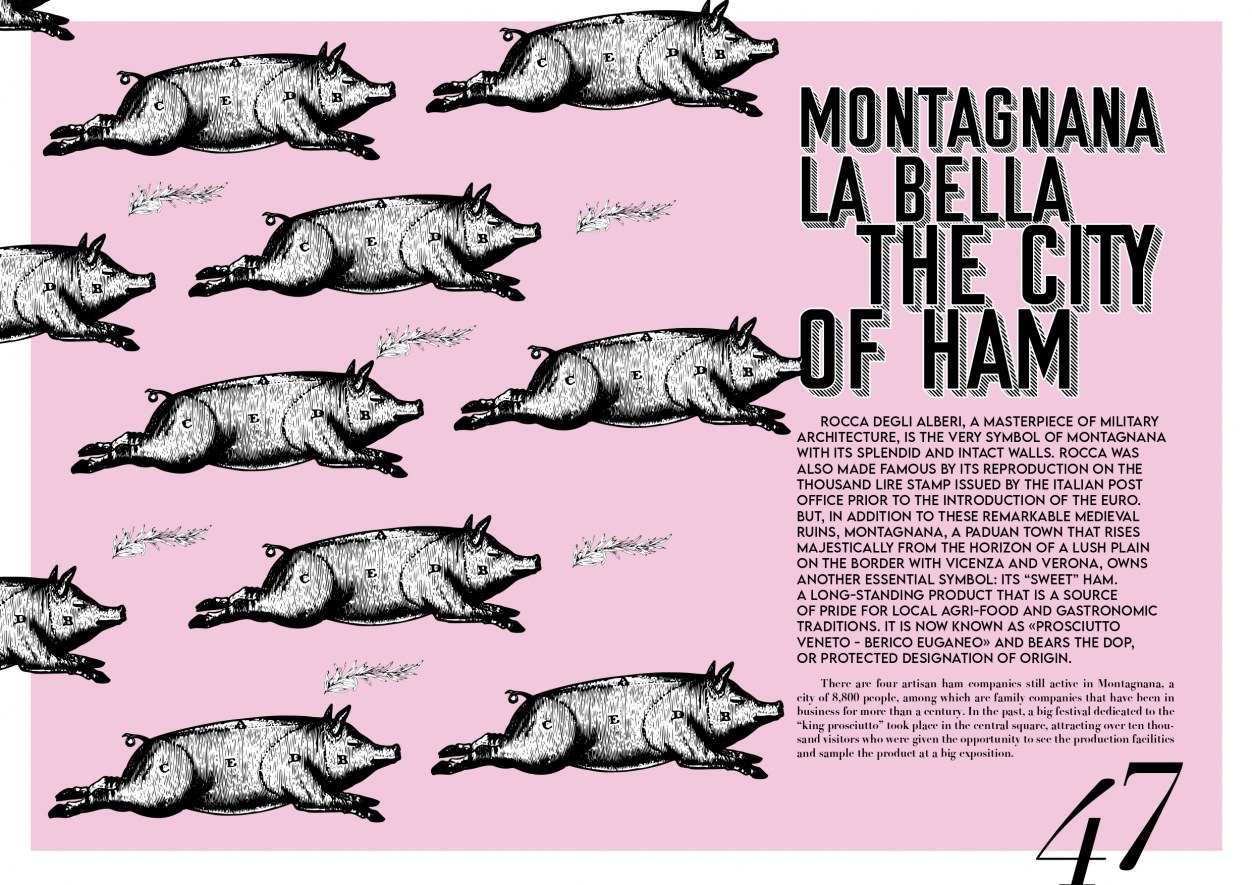 Rocca degli Alberi, a masterpiece of military architecture, is the very symbol of Montagnana with its splendid and intact walls. Rocca was also made famous by its reproduction on the thousand lire stamp issued by the Italian Post Office prior to the introduction of the euro. But, in addition to these remarkable medieval ruins, Montagnana, a Paduan town that rises majestically from the horizon of a lush plain on the border with Vicenza and Verona, owns another essential symbol: its “sweet” ham. A long-standing product that is a source of pride for local agri-food and gastronomic traditions. It is now known as «Prosciutto Veneto – Berico Euganeo» and bears the DOP, or protected designation of origin.

There are four artisan ham companies still active in Montagnana, a city of 8,800 people, among which are family companies that have been in business for more than a century. In the past, a big festival dedicated to the “king prosciutto” took place in the central square, attracting over ten thousand visitors who were given the opportunity to see the production facilities and sample the product at a big exposition.

The pandemic has deprived the city of the last two editions of the festival, but Montagnana’s mayor, Loredana Borghesan, guarantees that the ham will be given the spotlight it deserves as soon as possible. The organizers are also arranging a smaller event for this year; it will possibly take place in September, coinciding with the city’s other major event, the “Palio dei Dieci Comuni”, which has been a source of entertainment in the city since 1977. It consists of exciting challenges on horseback between the representatives of the ten municipalities of the ancient land of Sculdascia, dressed up for the occasion in medieval clothes, and is annually honored by the presence of jockeys from other famous Italian palios: Siena, Asti, Faenza… Traditionally, since 1366, the winner receives a painting of the palio; second place receives a rooster, and third place receives a melon, another traditional local product. Another historical curiosity, well documented in the castle museum, is the lyrical tradition. The walled city is, in fact, the birthplace of two great tenors: Giovanni Martinelli, who became New York’s “Lion of the Metropolitan”, and Aureliano Pertile, Toscanini’s favourite singer. An incredible coincidence, given the fact that both of them were born in the same year, 1885, and in the same street, San Zeno. An arena for summer shows is also dedicated to Martinelli and Pertile. Today, the tenor Christian Ricci’s accomplishments are reviving the lyric heritage.

Furthermore, Montagnana has earned international reputation thanks to the work of the Prototeatro, which is known for its productions based on mythological and fairy-tale themes. During the festival, major historical events like the Inquisition are re-enacted (“Witches”). Piero Dal Prà’s ensemble has received numerous awards related to these productions.

Montagnana is the perfect destination for tourists who want to spend a long weekend immersed in culture, food, and wine. Its fourteenth-century walls, which extend for 1,800 meters, are among the best preserved in Europe. The wall is massive and punctuated with 24 watchtowers and three fortified gates (Porta Padova, Porta Legnago, and Porta Vicenza), to which a fourth was constructed towards the end of the nineteenth century: Porta XX Settembre. Inside the walls, the city shines with buildings of great value, starting with the cathedral, built across the main square in a beautiful late Gothic style. The outside harmony is matched by an astonishing wealth of interiors, which includes a massive mural dedicated to the Battle of Lepanto.

There are numerous paintings by well-known painters, most notably Veronese and Buonconsiglio. A fresco attributed to Giorgione, portraying David and Judith, was discovered by chance thirty years ago behind a plaster.

There isn’t a single street within the walls that doesn’t have a palace worth seeing. Sanmicheli, a 16th-century architect who also erected a church in the Kremlin, signed the municipal one. If the Rocca degli Alberi fortifies the western gate (from where the threats of the Veronese Scaligers originated), the Mastio di Ezzelino fortifies the northern gate. The popular buildings leaning against the walls (in the interior area) are from the nineteenth century and were erected by the Austrian Lombard-Veneto administration.

Montagnana owes its fortune to the strong bond it had established with the Republic of Venice, to which it provided hemp for the Venice arsenal’s ropes. A bond that began in 1405 and ended with the fall of the Serenissima in 1797. The Greek stone of Istria that decorates the pavement of Piazza Vittorio Emanuele II and the Marciana column remain as a reminder of the friendship and fidelity that defined that connection.

Montagnana exudes history from every stone and smells of good ham in every tavern.

And when it comes to wine, there’s an abundance of riches: the Docs of neighboring Merlara or the more famous Doc and Docg of the Euganean Hills, the hills that softly move the horizon gazing out from the Ezzelino Mastio.

The “crudo dolce”, a century-long tradition

On June 10, the Consortium will celebrate its half-century anniversary: fifty years of protection and relentless promotion. The present presidency is held by a Montagnese, Attilio Fontana, who is the CEO of one of the oldest companies.

Montagnana still has four ham factories in operation, all of which adhere to traditional craftsmanship rules. The branding of the thighs occurs no sooner than 12 months of seasoning, although many items are also seasoned for twice as long, if not three times as long, before being released to the market.

Companies aim for quality by treasuring many little secrets, handed down from generation to generation. They collect a centuries-long heritage that is supported by several textual sources. These are the Attilio Fontana companies (which recently celebrated one hundred years of activity), Soranzo, Daniolo and Brianza.

These are four of the ten realities that comprise the Consorzio del Prosciutto Veneto DOP Berico – Euganeo: the other companies are located in Vicenza and Verona, particularly in the Berici Hills area, but there is no doubt that the Montagnana reality is among the consortium’s qualitative value niches.

The ham’s unique “sweetness” is the result of modest salting. Softness, precise marbling, and a pink color are further distinguishing characteristics of this amazing product, which is manufactured in 15 other municipalities in the area, in addition to Montagnana, and has earned recognition well beyond the regional borders.

Recommended restaurants within the historic walls

Prosciutto Veneto Berico – Euganeo can be tasted alone, paired with figs (a summer favourite) or in a variety of innovative recipes featuring pasta or risotto.

There are a few recommended restaurants within the walls where you can sample the famed ham. The restaurant “Aldo Moro” of the same-named hotel, which first opened its doors in 1938. Silvia Moro has taken over the kitchen after graduating with a degree in finance and dedicating herself to gastronomic studies, exhibiting a strong creative flair presented with lightness and creativity. Her brother Aldo is the sommelier. The Hostaria San Benedetto overlooks a picturesque alley in the centre and offers a more traditional cuisine, though revisited with sensitivity and respect for the raw material.

Laura Borghesan and Gianni Rugolotto, along with their son Federico, well represent the Paduan restaurant association in Montagnana. Hostaria Zanarotti, like the bakery from which it sprung, has a long and illustrious history. It serves an authentic and generous local cuisine, with passion as the key element capable of adding a special touch to each dish. (e.g., re.mal.)

Date:  December 22, 2021
PREVIOUS PROJECT
No poem was ever written by a drinker of water. – Horace, roman poet
NEXT PROJECT
The Lemon Houses (Limonaie) of lake Garda
HOME
Italian Good Living - All rights reserved. Web Agency
To Top
We use cookies on our website to give you the most relevant experience by remembering your preferences and repeat visits. By clicking “Accept”, you consent to the use of ALL the cookies.
Cookie settingsACCEPT
Manage consent