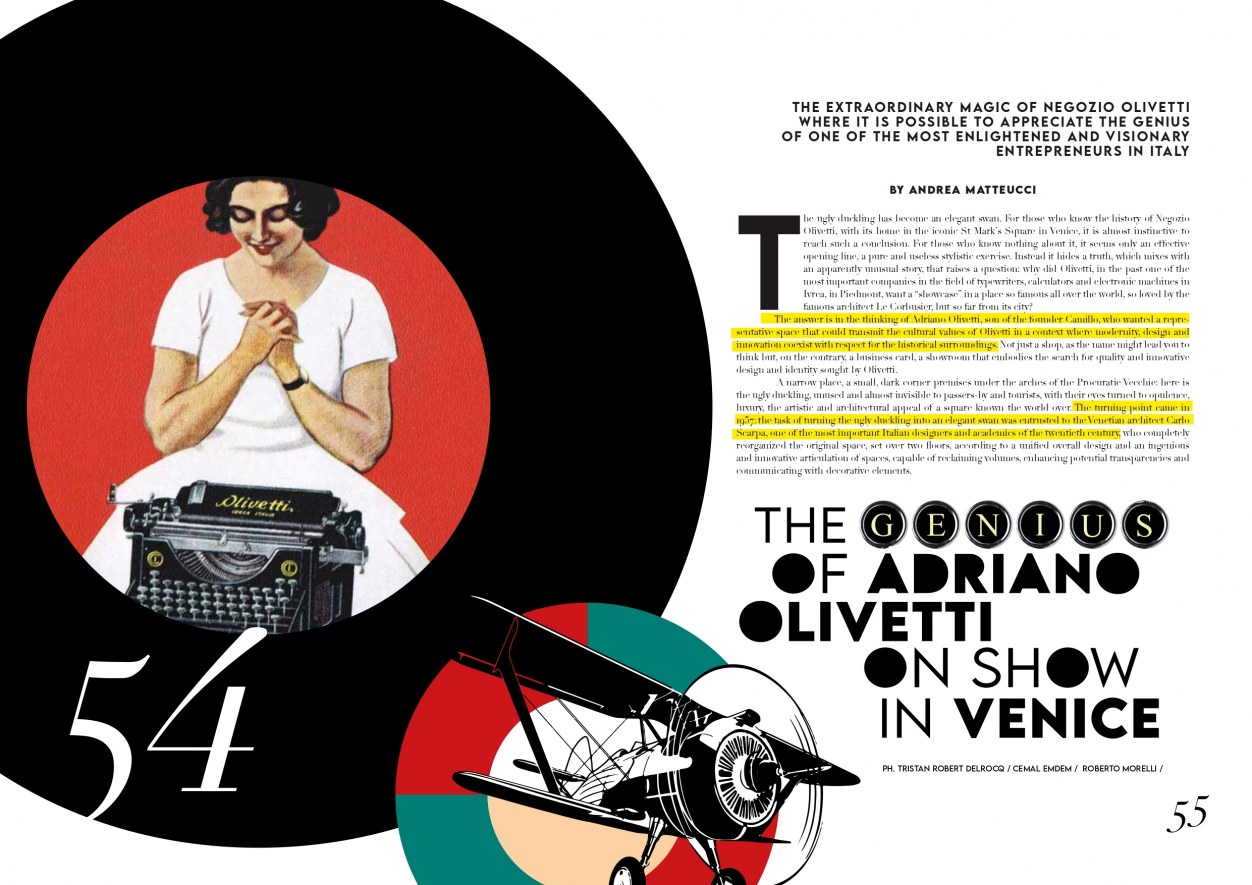 The extraordinary magic of Negozio Olivetti where it is possible to appreciate the genius of one of the most enlightened and visionary entrepreneurs in Italy.

The ugly duckling has become an elegant swan. For those who know the history of Negozio Olivetti, with its home in the iconic St Mark’s Square in Venice, it is almost instinctive to reach such a conclusion. For those who know nothing about it, it seems only an effective opening line, a pure and useless stylistic exercise. Instead it hides a truth, which mixes with an apparently unusual story, that raises a question: why did Olivetti, in the past one of the most important companies in the field of typewriters, calculators and electronic machines in Ivrea, in Piedmont, want a “showcase” in a place so famous all over the world, so loved by the famous architect Le Corbusier, but so far from its city? The answer is in the thinking of Adriano Olivetti, son of the founder Camillo, who wanted a representative space that could transmit the cultural values of Olivetti in a context where modernity, design and innovation coexist with respect for the historical surroundings. Not just a shop, as the name might lead you to think but, on the contrary, a business card, a showroom that embodies the search for quality and innovative design and identity      sought by Olivetti.

A narrow place, a small, dark corner premises under the arches of the Procuratie Vecchie: here is  the ugly duckling, unused and almost invisible to passers-by and tourists, with their eyes turned to opulence, luxury, the artistic and architectural appeal of a square known the world over. The turning point came in 1957: the task of turning the ugly duckling into an elegant swan was entrusted to the Venetian architect Carlo Scarpa, one of the most important Italian designers and academics of the twentieth century, who completely reorganized the original space, set over two floors, according to a unified overall design and an ingenious and innovative articulation of spaces, capable of reclaiming volumes, enhancing potential transparencies and communicating with decorative elements.

The result is a perfect balance between functionality and elegance that is centered around an airy room, introduced by Alberto Viani’s 1956 sculpture, Nudo al Sole, positioned on a base of black Belgian marble and lightly veiled by gently      moving water. The central staircase is extraordinary, almost suspended in mid-air, a masterpiece of lightness and dynamism; a vibe that also defines the spaces of the two long galleries on the upper floor, home to small office areas and part of the exhibition of historic Olivetti typewriters and calculators.

Scarpa’s genius is also revealed in the careful selection of materials: Aurisina marble, rosewood, African teak, metals and stones combine with the Venetian tradition of stucco and mosaics revisited with a modern twist.

A project of great expressive and cultural significance that brings together the three personalities present: that of Carlo Scarpa, who conceived and designed Negozio Olivetti according to his creative and design vision without forgetting, but rather enhancing, the Olivetti DNA, for a shared stylistic signature. A place, now protected by FAI, the Italian Environment Fund, which pays homage to the city of Venice using, as mentioned above, local materials: here are the three identities, the client company, the architect, the city, all skillfully blended in perfect harmony in such a way that one doesn’t dominate the others. You only have to walk in to breathe in the perfectly successful marriage of distinctive harmonies, construction details, unexpected light: it is homage and respect for the splendor and monumentality of the Venice’s St Mark’s Square; it is the identity of a brilliant designer and architect, who here expresses his choices and ideas at their best; but it is also a safe bet, transforming a dark, narrow, almost sad place into an example of interior architecture with a strong personality and great importance. But it is, above all, an environment designed to celebrate the typewriters and calculators that have earned their place in the history of the best Made in Italy design. A space, a true architectural promenade, which virtually illuminates Olivetti’s most iconic products: for example, think of the famous Lettera 22 typewriter and the Divisumma 24 printing calculator, both designed by Marcello Nizzoli and on display as part of the Museum of Modern Art, New York’s permanent collection. It is true Made in Italy, craftsmanship of culture, art and technology, for an icon of the Italian twentieth century.

Date:  December 22, 2021
PREVIOUS PROJECT
DiVò Pret a Porter: the pinnacle of Terre Gaie winery’s innovation
NEXT PROJECT
No poem was ever written by a drinker of water. – Horace, roman poet
HOME
Italian Good Living - All rights reserved. Web Agency
To Top
We use cookies on our website to give you the most relevant experience by remembering your preferences and repeat visits. By clicking “Accept”, you consent to the use of ALL the cookies.
Cookie settingsACCEPT
Manage consent