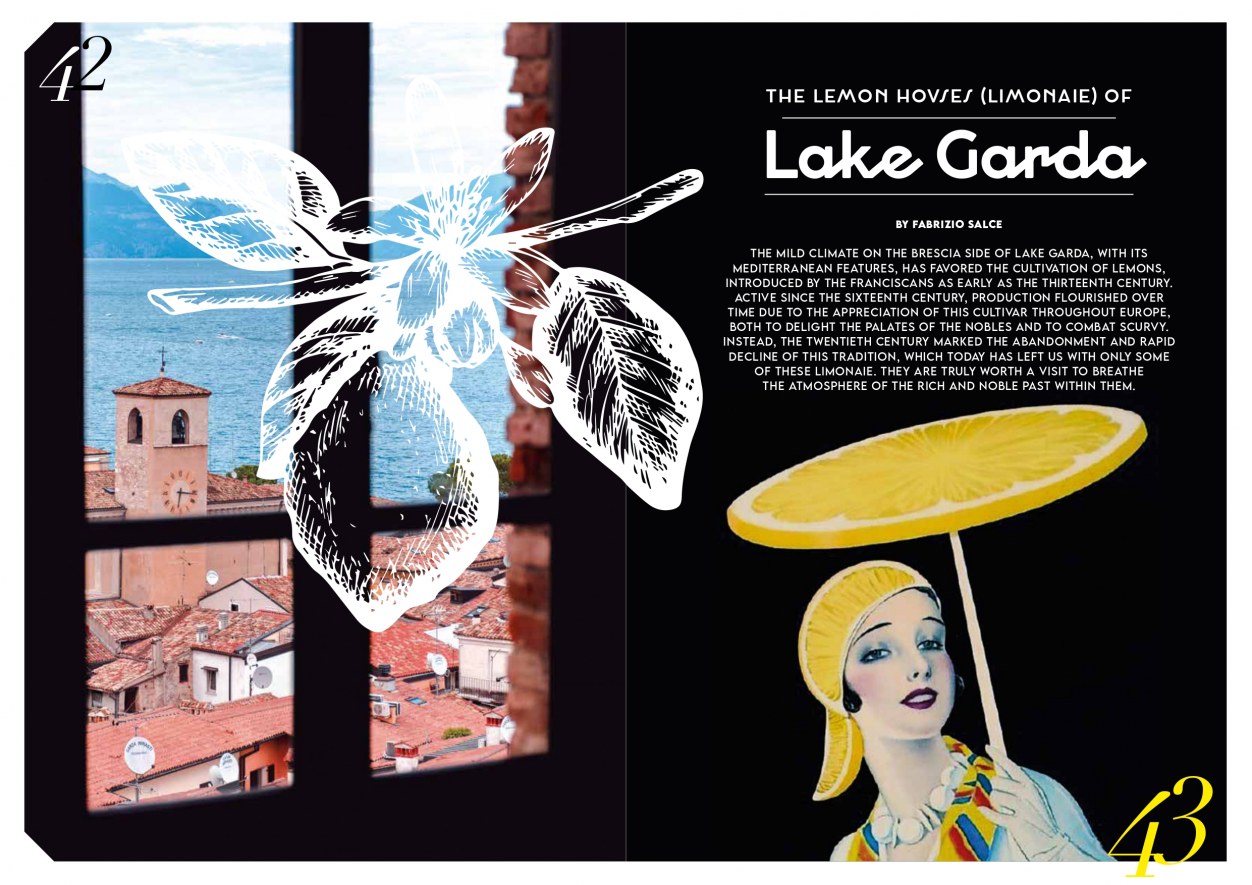 The mild climate on the brescia side of lake garda, with its mediterranean features, has favored the cultivation of lemons, introduced by the franciscans as early as the thirteenth century. Active since the sixteenth century, production flourished over time due to the appreciation of this cultivar throughout Europe, both to delight the palates of the nobles and to combat scurvy.

Instead, the twentieth century marked the abandonment and rapid decline of this tradition, which today has left us with only some of these limonaie. they are truly worth a visit to breathe the atmosphere of the rich and noble past within them.

The lemon, the most elegant of agricultural crops, as Carlo Cattaneo, patriot, philosopher, politician and Italian writer, loved to write in 1844. The lemon is a productive and ornamental plant, and historical substance of the Italian agricultural landscape. From Garda to Sicily, from Liguria to Campania, from north to south, the cultivation of citrus fruit has strongly influenced man’s participation in the transformation of the land.

Think of the many terraces spread over different altitudes, the structures designed and built to protect the plants from the cold and winds of the harshest months, and then of the irrigation systems that have stimulated more insightful ingenuity over the centuries. There have been centuries of history and hard work, of evergreen leaves, flowers, scents and colors, of succulent fruits that have accompanied the adventures of so many travelers.

The Franciscan friars probably introduced the cultivation of lemons to this land protected from cold winds by the high rocky walls, as early as the thirteenth century. Certainly, by the sixteenth century the production of limonaie was more than active. Over time, the Garda lemons became precious to the point of being exported to a large part of Europe (Poland, Austria, Hungary, Russia, up to Siberia) in part to delight the palates of nobles and aristocrats who appreciated their flavor and perfume, but above all because the Vitamin C contained within was essential to fight the disease known to the world as scurvy.

But then came the crisis, the abandonment and the consequent conversion of crops: for this reason, today we find only a few limonaie. Local gardeners had to choose more profitable agriculture and directions for the markets, inevitably reducing citrus production. Thus, the work and botanical varieties of what had been for centuries one of the most flourishing citrus production areas in our country were lost. This came about from the beginning of the twentieth century and lemons lost their role as the principle product for the local economy. Because there were not only gardeners, the people in charge of managing the lemon houses, who had to watch them day and night, to close them up to protect them from fog and frost and open them up to air and sun. At that time there was early and late fruit, fine and superfine, but also waste, and this meant a lot of work for the storage and calibration warehouses, for transport, for processing. Not to mention all those who sold lemons to tourists with carts along the roads.

Of the three delightful limonaie that you can visit today, to breathe in the atmosphere of a rich and noble past, one is the New Garden of Prà de la Fam. Restructured in 1985, it has fortunately returned to life offering its fruits to tourists and education concepts to students. It is an old eighteenth-century limonaia located a few meters from the port of Tignale, while the Prà de la Fam is a small portion of land in the center of a bay along the coast, an enchanting beach where fishermen once pulled their boats ashore and spread the nets.

It is here that the first garden, the Old Garden, was built in 1754, and later, in 1850, the New Garden was added. The second, La Malora limonaia, can be found in Gargnano. Don’t be fooled by the name; it is the same name as a stream that flows along the left side of the garden when facing the lake.

Here you will find Fabio Gandossi who gave up everything a few years ago and decided to carry on an old family tradition: the cultivation of lemons. Its limonaia rises over several tiers and gives the visitor a harmonious sense of peace. In addition to lemons as fruits, Fabio offers other typical products he prepares such as jams, syrups and “limoncello”, which in Gargnano is called “limoncino“. It is a sixteenth century citrus grove characterized by steep stairs with narrow and irregular steps, purchased by Fabio’s father in 1978 after years of neglect.

At Malora, as in the other limonaie, you will find the Casello, or the shelter of the protective bulkheads, and the traditional irrigation system used in the past, made up of stone channels operating entirely by gravity.

The third limonaia not to be missed is located in the delightful town of Limone del Garda, where you can admire ravines and sights that are just as good as many renowned seaside resorts: it is truly wonderful. There are various types of lemons but also oranges, grapefruits, cedars and a few plants with oriental fruits. It is the limonaia del Castel and inside, in addition to the many terraces with potted plants, you can find a real museum that tells the story of the golden years of these gardens.

The typical variety of lemons around the lake is Madernina. They are plants that produce medium-sized fruits with a thin and fragrant skin. On average, a plant can produce a thousand lemons a year. Lemon trees are grafted onto bitter orange to make them more resistant to cold and disease.

Treat yourself to a lunch or dinner based on dishes prepared with lake fish and flavoured with lemon. For example, fettuccine seasoned with a ragù of perch, whitefish, tench and salted sardines strictly from the lake, enhanced with the precious Garda extra virgin olive oil and blended with white wine from Valtenesi; and then the lemon to complement the recipe. If you pass through these wonderful areas do not forget the limonaie. Immerse yourself in their interiors, smell their perfume, close your eyes, relax and dream.

Date:  December 22, 2021
PREVIOUS PROJECT
“Montagnana la bella”, the city of ham
NEXT PROJECT
An extraordinary wine in an extraordinary land
HOME
Italian Good Living - All rights reserved. Web Agency
To Top
We use cookies on our website to give you the most relevant experience by remembering your preferences and repeat visits. By clicking “Accept”, you consent to the use of ALL the cookies.
Cookie settingsACCEPT
Manage consent