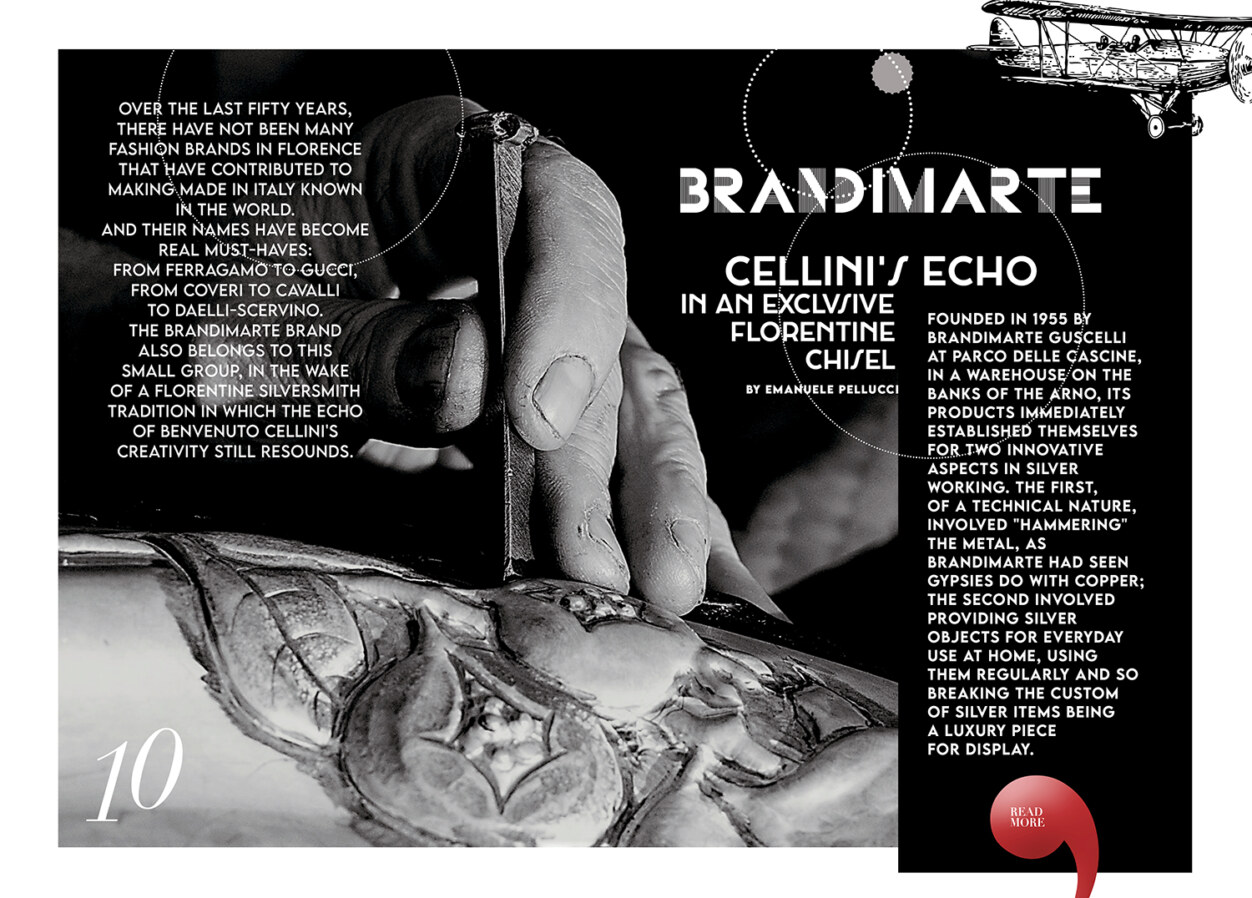 Over the last fifty years, there have not been many fashion brands in Florence that have contributed to making Made in Italy known in the world. And their names have become real must-haves: from Ferragamo to Gucci, from Coveri to Cavalli to Daelli-Scervino.  The Brandimarte brand also belongs to this small group, in the wake of a Florentine silversmith tradition in which the echo of Benvenuto Cellini’s creativity still resounds.

Founded in 1955 by Brandimarte Guscelli at Parco delle Cascine, in a warehouse on the banks of the Arno, its products immediately established themselves for two innovative aspects in silver working. The first, of a technical nature, involved “hammering” the metal, as Brandimarte had seen gypsies do with copper; the second involved providing silver objects for everyday use at home, using them regularly and so breaking the custom of silver items being a luxury piece for display.

His thirty-year old granddaughter Bianca, with her great dynamism, is today at the helm of the historic brand and she tells us, “At the start his work was even criticised. People soon had to change their minds because hammering the silver plate as he and his craftsmen did created a particular luminous effect”. When he died in 1994, his children Stefano and Giada continued expanding the range of products with new lines: one of these was the Wine Collection in which decanters and tasting glasses in 925 silver found a place, following the successful trend of the wine sector. “There was no invention in this case” – explains Bianca – “because in the past the material was regularly used for glasses; in fact, as an antibacterial, antibiotic, conductor of heat and an enhancer of aromas, silver is the ideal metal for the consumption of food and drinks”.

The wine collection allowed the Guscelli family – Brandimarte was the name he was baptised with by his parents, who were passionate about Orlando Furioso – to further expand the markets.  “The collection was created from an idea of my father Stefano and Klaus Riedel, who was a great buyer of our silver glasses, which he just used for drinking wine. Hence the creation of our tasting glass, which was destined to be a resounding success. It is obvious that this glass does not intend to replace an icon such as that of the crystal glass, but rather to allow quality wine to be able to count – in addition to crystal – on another and extraordinary type of glass: that of silver”.

If silverware enjoyed considerable success up to 2000 as a gift item, in the following decade the increase in the cost of raw materials and the collapse in trends and tastes, especially amongst young people, caused a general crisis in the sector. In addition to these factors, foreign competition and sanctions against Russia, one of our best markets, were also determining factors. All this led to Stefano Guscelli’s decision  to “kill off” the glorious Brandimarte brand in 2016. A great loss for quality Florentine craftsmanship.

Stefano, however, had not taken into account his young daughter Bianca, who had been in the workshop since she was 6 years old, touching the metal, looking and listening, even though she couldn’t ask any questions. And once she grew up, on the strength of what she learned from travelling the world with her father and her work experience at Chanel, Bianca started a strategy to relaunch the Brandimarte brand.  “It took a few months” – she says enthusiastically in her new shop in the historic centre of Florence – “here I am able to regain possession of the brand, to reconnect with the artisans who worked with us and to resume the business. The news of Brandimarte’s rebirth, boosted by newspapers and television, is bringing back customers, old and new. And the requests from abroad are also starting up again.”

What are your future projects? “As we are working very well with the United States” – concludes Bianca – “I would like to open a concept store there to make drinking from silver fashionable, whilst at the same time making Brandimarte an increasingly recognisable brand. On the other hand, today if you are not a brand you are nobody. And as we are starting from a brilliant idea, in a sector where there is little competition, I hope this relaunch will be successful.”

Date:  March 23, 2021
PREVIOUS PROJECT
Alessandro Oteri, when shoes love women and the environment
NEXT PROJECT
Live Italy physically!
HOME
Italian Good Living - All rights reserved. Web Agency
To Top
We use cookies on our website to give you the most relevant experience by remembering your preferences and repeat visits. By clicking “Accept”, you consent to the use of ALL the cookies.
Cookie settingsACCEPT
Manage consent