Italian Good Living | Renato Zaghini: “Promoting Made in Italy together!” 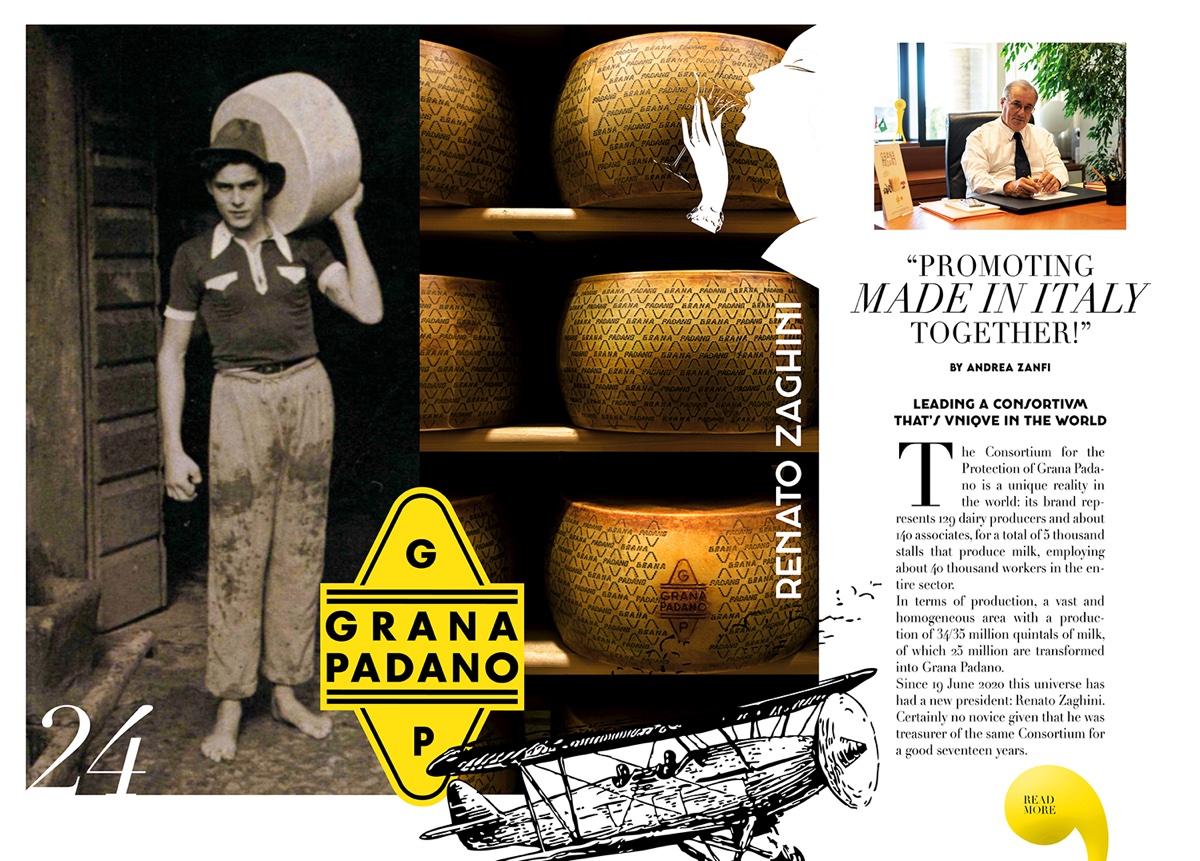 Renato Zaghini: “Promoting Made in Italy together!”

Leading a consortium that’s unique in the world

The Consortium for the Protection of Grana Padano is a unique reality in the world: its brand represents 129 dairy producers and about 140 associates, for a total of 5 thousand stalls that produce milk, employing about 40 thousand workers in the entire sector. In terms of production, a vast and homogeneous area with a production of 34/35 million quintals of milk, of which 25 million are  transformed into Grana Padano. Since 19 June 2020 this universe has had a new president: Renato Zaghini.  Certainly no novice given that he was treasurer of the same Consortium for a good seventeen years.

It seems almost pointless to ask him if he sees this appointment as the culmination of years of work or if, instead, he has the impression of a new challenge to be overcome. His answer is decisive, reinforced by a look that leaves no room for replies in this regard: “I’m not afraid of new challenges. I’ve faced many. Nor could it be any other way because I was born in 1956, and I’m therefore from the last century, or because I have been working in this sector for a lifetime. Besides, I don’t have time to waste. At my age, we no longer count the years, but rather the days. With everything there is to do…”. I look at him with admiration, but I don’t hold back: “So you don’t mind the excess of 10 thousand liters of milk…”. The tone of his voice is that of a man who is not accustomed to backing down in the face of a challenge: “The idea of surplus is completely outdated. What was once a problem has now been transformed into potential. The milk that cannot be transformed into Grana Padano, is today diverted to other avenues: drinking milk, the soft cheese industry, mozzarella, food preparations…  A bet that goes back to production plans that we decided to adopt about fifteen years ago, which later became European law. It is within the framework of this strategy that the consumption of our products, which had already previously increased, further increased during lock down. Our decision to focus on a quality product, promoting it effectively, has paid off!”.

It would be a mistake to think that when Zaghini talks about strategy here, he has only long-term action plans in mind. The new president of the Grana Padano Protection Consortium remains a practical man: “The growth in consumption of our products is certainly linked to the quality / price ratio that they guarantee, but also to the trust in them that has been established over time”. It is along the path of this trust that Grana Padano has been transformed into a Consortium so significant that it is about ten times larger than that of Parmigiano-Reggiano. Two products, two worlds, but also two different brands. I can’t help but ask him: “Is there only competition between these two entities or is there some kind of dialogue?”. He hesitates for a moment, but then his decisive and constructive character seems to prevail. The two are very different in structure: the Grana Padano Consortium is a single entity, with a single headquarters, currently located in Desenzano; the Parmigiano Consortium is comprised of internal departmental subdivisions. In addition, of course, to the differences in the various production processes of their respective cheeses. However, this does not mean that dialogue between us is not possible or indeed welcome. It may be able to lead us to create a system, especially abroad, to overcome the confusion about the Made in Italy product that still reigns among foreign consumers. Like back in the day when Rivera and Mazzola were part of the national team; they went abroad to play – and win – together… A nice dream for now, but who knows?”

The example of Rivera and Mazzola seems ingenious to me and could become a winning ticket. Just as it has become for the Prosecco world, with its ability to present itself abroad with a solid brand that has ended up outperforming far more prestigious foreign wines, affecting revenue positions that had lasted for decades. However, Zaghini’s voice interrupts the flow of my thoughts: “Each product has its own distinctive features, that’s for sure, and it’s up to the consumer to perceive them. What I will fight against with all my might, however, is the attempt to differentiate the two at all costs when instead we are, so to speak, “under the same umbrella”: a producer of Parmigiano, or Grana Padano, cannot attempt to establish itself at the expense of another producer of the same type of cheese! There is also some attempt of this nature here in the Mantua area. But this is not the way forward: we must differentiate ourselves only in order to enhance the perception of all Grana Padano. Then the consumer chooses”.

I comment spontaneously: “The consumer is often not very astute in perceiving the difference between products. This is also true, for example, in the world of wine. I know very well that I love Lambrusco and I’m fighting to tell about its characteristics and distinctive features! Because there is Lambrusco and Lambrusco, that is, one Lambrusco isn’t like another just like there is Grana Padano and Grana Padano… Perhaps a conversation about unity could work abroad, but in Italy? Is it still a fact that Italians struggle to distinguish between Parmigiano Reggiano and Grana Padano?”

The tone of his voice rises, as though I have touched a nerve: “Of course, it is more common to hear ‘Parmesan’! Even if in recent years the Grana Padano Consortium has made a great leap forward from a qualitative point of view, insisting on regulations that go in favor of perceived quality, with greater precision in branding. Think of the bags of grated grated grana cheese. At the beginning there was no lack of those who thought of them as a sort of loophole, useful for “getting rid of” unsaleable batches of cheese. But that was very wrong: the fact that grating could only be done within the area, under the supervision of an official paid by the Consortium and with specific analyses aimed at determining the pulp / rind ratio of the cheese in question, illustrated that the goal was quality. And it is no coincidence that the grated sector has become the fastest growing sector “.

I realize from the way he speaks that he is taking complete advantage of his more than ten-year experience as treasurer of the Consortiumto look to the future: “One of the first objectives I would like to achieve is to become fully part of the restaurant world. If the legislation on the obligation of product traceability were finally passed, it would give us a big hand. The restaurateur is certainly not obliged to use Grana Padano, but if he does, he must write it on his menu. An equally decisive objective is to grow: to grow further so as not to lose domestic and foreign market share. In this respect we will have to worry about consolidating the supply chain. It will be a question of rebalancing the value to be shared between the various players, including large-scale distribution, because today this is still a serious problem: the milk sector is too compromised, and has been for too long”.

Renato Zaghini, after having been treasurer of the PDO Grana Padano Protection Consortium for seventeen years, has been its new president since 19 June. His experience is made up of meticulous knowledge of the complex dairy world, and he intends to put it to good use to effect profound change in the world of Grana Padano: a world that is capable of brilliantly representing the quality of Made in Italy at an international level, but that still needs to grow. Only by presenting itself with a united image will this supply chain with great potential achieve consolidation and success.

Date:  December 1, 2020
PREVIOUS PROJECT
What does it mean to promote made in Italy?
NEXT PROJECT
The Sicilian cart, from vehicle to work of art
HOME
Italian Good Living - All rights reserved. Web Agency
To Top
We use cookies on our website to give you the most relevant experience by remembering your preferences and repeat visits. By clicking “Accept”, you consent to the use of ALL the cookies.
Cookie settingsACCEPT
Manage consent