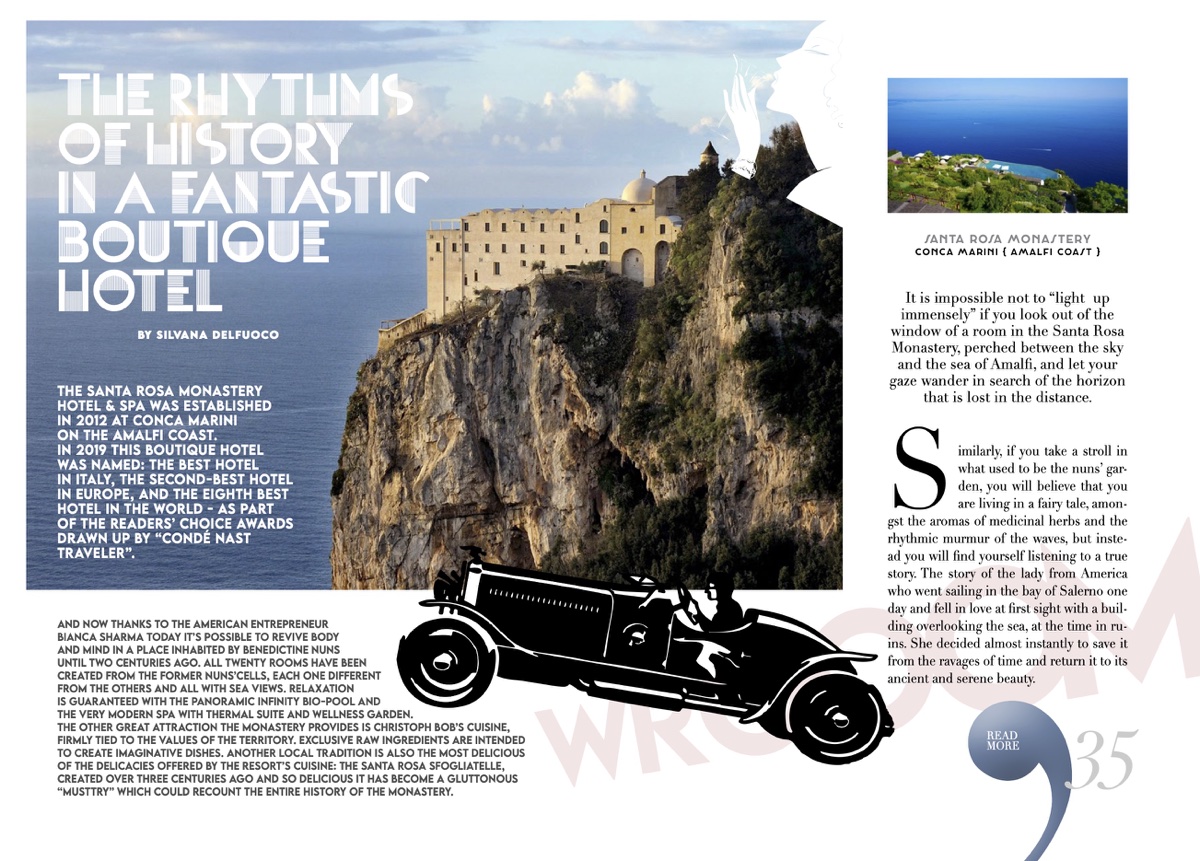 The rhythms of history in a fantastic boutique hotel

It is impossible not to “light  up immensely” if you look out of the window of a room in the Santa Rosa Monastery, perched between the sky and the sea of Amalfi, and let your gaze wander in search of the horizon that is lost in the distance.

Similarly, if you take a stroll in what used to be the nuns’ garden, you will believe that you are living in a fairy tale, amongst the aromas of medicinal herbs and the rhythmic murmur of the waves, but instead you will find yourself listening to a true story. The story of the lady from America who went sailing in the bay of Salerno one day and fell in love at first sight with a building overlooking the sea, at the time in ruins. She decided almost instantly to save it from the ravages of time and return it to its ancient and serene beauty.

It would be from this sudden decision that the Monastero Santa Rosa Hotel & Spa was born on the Amalfi Coast of Conca Marini in 2012: a boutique hotel among the most refined in the world and awarded in 2019 – as part of the Readers’ Choice Awards drawn up by the American magazine “Condé Nast Traveler” – as the best hotel in Italy, the second best hotel in Europe and eighth best hotel in the world. In the place where until two centuries ago the Benedictine nuns lived devoting sacred time to prayer and work, today’s women and men can rediscover the authentic meaning of their own time, regenerating their body and mind in a space of “secular sacredness” thanks to the tenacity of the American entrepreneur Bianca Sharma.

There are a total of twenty rooms and suites that will host you during your stay: all have been converted from the former nuns’ cells, each one different to the others, but they all overlook the sea and get plenty of sunlight. The furniture, chosen personally by Bianca Sharma herself, combines antiques with modern designer objects. Relaxation, then, is guaranteed: first of all by the panoramic infinity pool, created by hand in the rock on the edge of the cliff; but, above all, by the possibility of using one of the most fascinating spaces in the whole monastery: the Spa – with its vaulted ceilings, mosaics and stone walls that evoke the atmosphere of the past.

Inside the rock, next to the foundations, the building is an authentic space taken straight from history: a very modern spa has been created in the spaces where there were once ancient cellars and the large cisterns that were used to collect rainwater.

Conceived so as to maintain a solid relationship with its distant past, its heart is certainly represented by the thermal suite. And if the latter takes up the tradition of Roman baths, echoing oriental atmospheres, its most original area is the one created outdoors: the wellness garden. Here, in the shade of a bougainvillea pergola overlooking the sea, among the scent of lemons and Mediterranean herbs, you can indulge, by yourself or as a couple, in the treatment provided by skilled hands. Perhaps afterwards you might enjoy a light lunch while contemplating the breath-taking view  the terrace offers.

At this point, the other major attraction of the Santa Rosa Monastery will come into play: Christoph Bob’s cuisine. The right-hand man of the great Heinz Beck, curiously his personal story is very close to that of his master. In fact, he too chose to live on the Amalfi coast for the love of a woman from this area. Perhaps for this very reason, his cuisine is strongly anchored to the values of the region and its typical products, some of which are grown organically in the monastery’s terraced garden. And therefore fresh vegetables and fragrant herbs, but also fish from the Tyrrhenian Sea, Gragnano pasta, Cetara anchovies, artisan cheeses… exclusive raw materials destined to give life to imaginative, innovative, creative dishes, but above all invigorated by the all-round solidity of this land. Just like the monastery, perched for centuries on its cliff overlooking the sea.

And still from the traditions of the monastery come what has become the most delicious of the delicacies offered by the resort’s kitchen: the sfogliatelle di Santa Rosa. And if at first glance they seem to be a variant of the well-known Neapolitan sfogliatelle, don’t be fooled by their shape.

In reality they are unique and were created over three centuries ago by the forgetfulness of one of the nuns, who had been assigned to the monastery’s kitchen to cook some of the leftover dough that was destined to make bread in the oven. They were so exquisite that soon they were being appreciated and claimed by the Neapolitan nobility itself. The mother superior of the time decided to distribute it freely to all the inhabitants of the town on a day particularly dear to the Monastery: the 24th August, the feast of the patron Saint Rose of Lima. And these desserts became an instant success, which allowed their recipe to come down to us, or rather, to Christoph Bob’s team in the kitchen, becoming a “must try” delicacy whose flavour is able to tell the whole story of the monastery in which it was created.

Date:  November 24, 2020
PREVIOUS PROJECT
The Sicilian cart, from vehicle to work of art
NEXT PROJECT
Quality as a budgetary strategy
HOME
Italian Good Living - All rights reserved. Web Agency
To Top
We use cookies on our website to give you the most relevant experience by remembering your preferences and repeat visits. By clicking “Accept”, you consent to the use of ALL the cookies.
Cookie settingsACCEPT
Manage consent