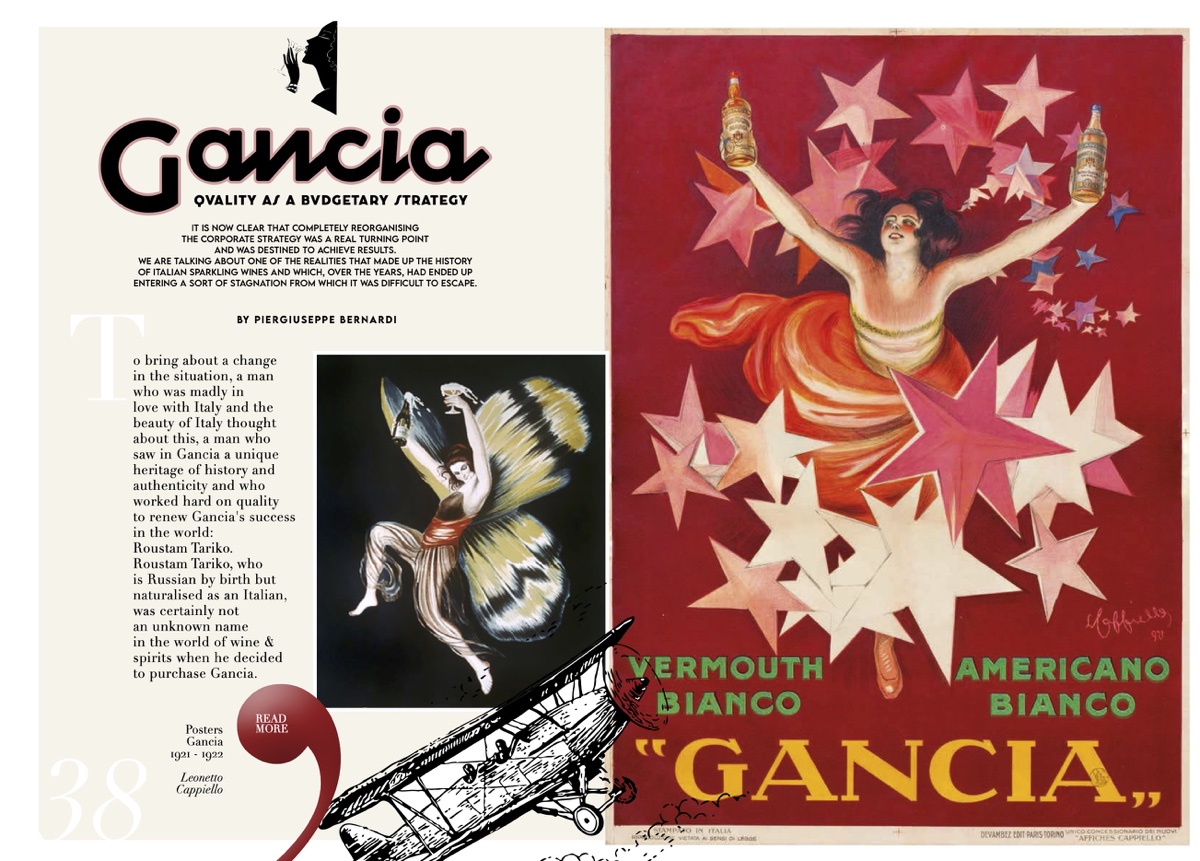 Quality as a budgetary strategy

It is now clear that completely reorganising the corporate strategy was a real turning point and was destined to achieve results. We are talking about one of the realities that made up the history of Italian sparkling wines and which, over the years, had ended up entering a sort of stagnation from which it was difficult to escape.

To bring about a change in the situation, a man who was madly in love with Italy and the beauty of Italy thought about this, a man who saw in Gancia a unique heritage of history and authenticity and who worked hard on quality to renew Gancia’s success in the world: Roustam Tariko.

Roustam Tariko, who is Russian by birth but naturalised as an Italian, was certainly not an unknown name in the world of wine & spirits when he decided to purchase Gancia. The group he heads, RTL, is an important player in the banking and insurance sector thanks to two solid banking institutions, one of which operates in Russia and the other in the Ukraine. Even so, the position of the other branch of the group is even more prominent. Roust Corporation is better known for the Russian Standard, Zubrowka and Green Mark brands, which are emblems of high quality Russian and Polish vodka. In this specific sector, in fact, Roust Corporation is the second largest producer of vodka and the fifth largest distributor of spirits in the world and indisputably the leading player in Russia and Eastern European countries, but is also one of the leaders in Asia, the United Kingdom, Germany and France.

Roustam Tariko’s bond with the Italian world of wine, although rooted in an appreciation that soon turned into passion, had therefore also consolidated over time into a professional perspective. In fact, his career began with the import of Martini & Rossi and later Cinzano products to Russia. They soon became products so well known to the Russian public that over time the respective groups decided to set up independent branches. It was therefore necessary for the Russian entrepreneur to focus personally on an Italian product, looking for a historic brand, with the aim of buying it and transforming it, within the framework of its distribution programme, into an explicit symbol of Made in Italy in the world.

Roustam Tariko would identify this symbol in Gancia, and in 2011 – almost by chance and with lightning-fast timing – he made the decision to buy it, just when the company, which was by then in decline, was sailing in difficult waters. Gancia had reached this situation after more than a century, during which the Canelli company had flourished and become the very emblem, first with “Italian Champagne”, and then with Asti Spumante, which was opened whenever there was something important to celebrate in the family or amongst friends. The far-sightedness of Carlo Gancia, who at a very young age decided to move to Reims to get a job at Piper-Heidsieck so he could discover the secret of Champagne, would translate in the following years into the creation of the first Italian “Metodo Classico” sparkling wines. Carlo was also responsible for Gancia creating the first white Vermouth and it has produced other excellent products during its 170-year history, including the Americano, Fernet, and many others that have gone down in the history of Italian liqueurs.

Thanks to the acquisition of Gancia by Roust Corporation, it was possible to set the company on a new course, on the one hand by continuing to guarantee previous employment levels and on the other by relaunching its image in terms of quality, that had by then become dull for what had previously been the leading company in the Italian sparkling wines sector.It did not take long to understand how a rationalisation and reorganisation project was capable of enhancing the previous corporate structure and of re-projecting it in a direction in line with market changes.

And, even in this case, the goal was achieved by focusing on an increase in quality.

Quality has always been the essential point of reference in Roustam Tariko’s business strategy, which in Gancia was also set out both in terms of production and image. The president of Gancia s.p.a., Alessandro Picchi explains the first issue, “Within a few years the company was not just making a profit, but was also one of the few producers of Asti that was growing. A growth that however is not just affecting the quantity, given that we have gone from eighteen to thirty million bottles with the realistic possibility of reaching forty-five million units. On the contrary, it was quality that distinguished the production of the new course of Gancia, which grew both in the Asti Spumante, with the “Classic Method 24 Months” winning the most important awards in the sector, but also and above all in the Alta Langa line, which today has become one of the best Italian ”Metodo Classico” sparkling wines, having been conceived as the Italian challenger to Champagne. The result has been that we have seen our market grow at the same time but also become more and more tied to admirers of quality wines”.

This growth in product quality was also accompanied by a radical change in packaging: “When we took over Gancia, the bottles we produced did not immediately convey to the consumer the image of the quality that was inside. This was the reason for the decision to completely change the packaging both in the wine sector and in the spirits sector. The restyling of the entire range, which was personally overseen by Roustam Tariko, was entrusted to Thierry Consigny, a French designer and creative who, after having collaborated with Hermes for a long time, is now collaborating with other major manufacturers in the sector, such as Louis Roederer (with its famous top-of-the-range Champagne “Cristal”) in France and Bellavista in Italy. And so after this radical restyling, our “Metodo Classico” bottles changed their appearance, finding a distinctive element of quality in the aluminium capsule that completely encloses both the bottles and the magnums of Alta Langa,  in a product carefully formulated and destined for a high-end market.  Our “total body” capsules have the advantage of guaranteeing the best preservation of the product, as the wine remains completely in the dark until it is uncorked and poured into the glass”.

Date:  November 17, 2020
PREVIOUS PROJECT
The rhythms of history in a fantastic boutique hotel
NEXT PROJECT
Tenuta Le Cave
HOME
Italian Good Living - All rights reserved. Web Agency
To Top
We use cookies on our website to give you the most relevant experience by remembering your preferences and repeat visits. By clicking “Accept”, you consent to the use of ALL the cookies.
Cookie settingsACCEPT
Manage consent