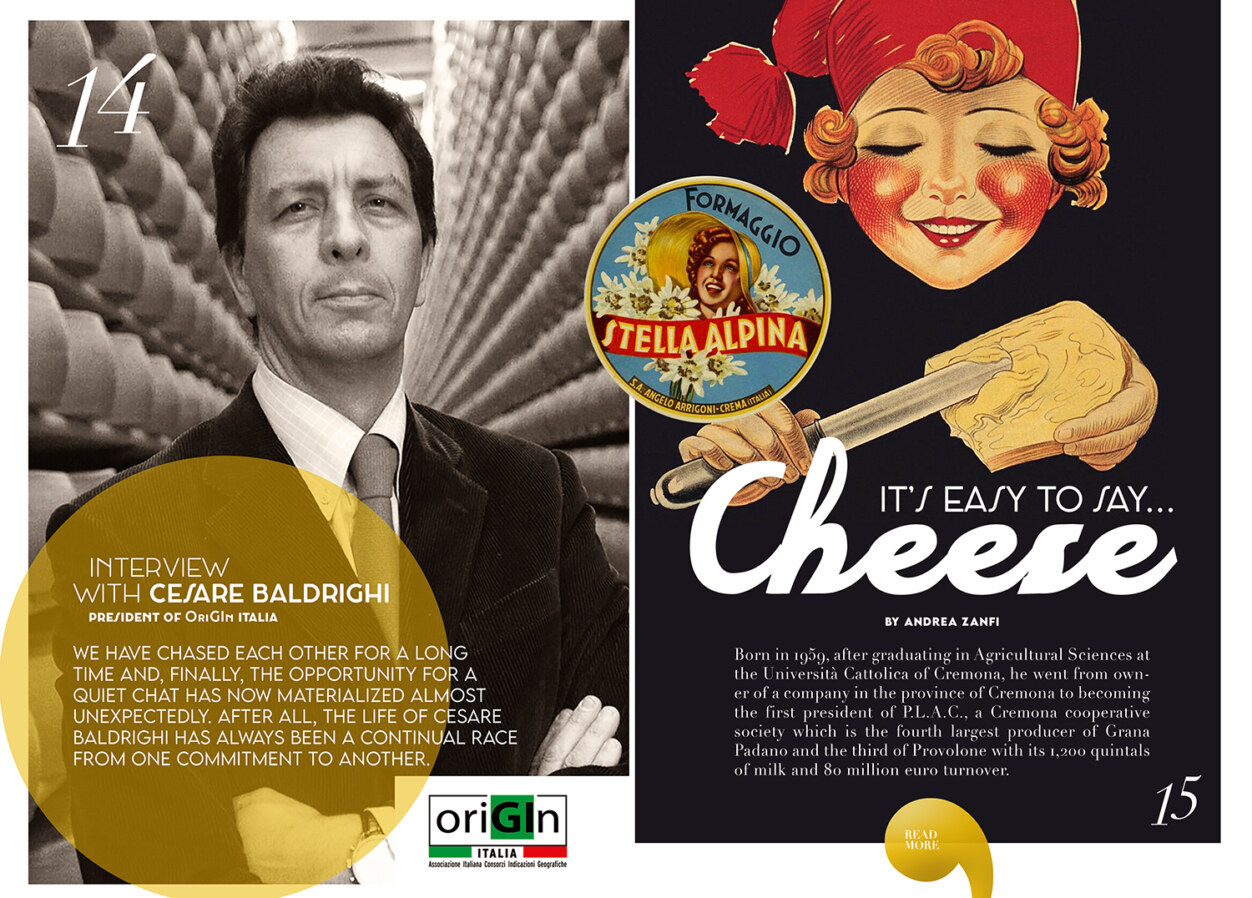 We have chased each other for a long time and, finally, the opportunity for a quiet chat has now materialized almost unexpectedly. After all, the life of Cesare Baldrighi has always been a continual race from one commitment to another.

Born in 1959, after graduating in Agricultural Sciences at the Università Cattolica of Cremona, he went from owner of a company in the province of Cremona to becoming the first president of P.L.A.C., a Cremona cooperative society which is the fourth largest producer of Grana Padano and the third of Provolone with its 1,200 quintals of milk and 80 million euro turnover. Then from 1999 to 2020, a good twenty-one years, he was president of the Consortium for the Protection of Grana Padano, and a few months ago he became president of OriGIn Italia, the association that brings together all the consortiums of products with Protected Designation of Origin, PDO, and those with Protected Geographical Indication, PGI, which encompass the excellence of Italian agri-food products. An association that those who produce oil, vinegars, cured meats, bakery products and fruit and vegetables, as well as cheeses deal with, expressed by many medium-small companies present in every part of Italy, as well as two production giants like the Grana Padano and Parmigiano Reggiano consortiums.

And it is perhaps due to his inseparable link with the world of cheeses and his consolidated experience in this regard that the chat with Baldrighi, while waiting for future instalments, almost naturally ends up concentrating precisely on cheese.

A product that, in terms of quantity and quality, represents not only a resource for our GDP, but also an important part of our exports.

“Until a few decades ago when we talked about cheeses, our thoughts immediately went to French cheeses, which for a long time obscured Italian production a little, which nevertheless has never been inferior neither in number nor in terms of excellence.

More recently things have reversed and this is due to the distinctiveness of our cheese products which differ from those of the rest of the world in the uniqueness of the raw material: milk.

Our cheeses are the result of a transformation that starts with milk from the cow, buffalo, sheep and goat and no other country can rely on such biodiversity.

In a numerical comparison between cheeses, I think we can safely say that Italy is clearly ahead. And I’m talking exclusively about the raw material, bound to the milk which the cheeses are derived from. If we then wanted to consider the conservation and aging techniques, the gap between our cousins from beyond the Alps would become even more marked, with unimaginable numbers. The element that gives us the most strength is tradition. Furthermore, on our part, the awareness that our cheeses have an inimitable aging potential has grown over time. If we want to continue talking about the French, it will not be difficult to see how their cheese making tradition is conceived from a perspective where aging seems to be almost completely alien, except for several sporadic cases that can be counted on the fingers of one hand, cheeses such as the Camembert of Normandy, the Contè, the Cabtal, the Beaufourt and the Saint-Nectaire. However, these are exceptions that confirm a general rule that moves in the opposite direction: that of focusing heavily on fresh and blue cheeses. Where aging achieves excellent results is in the French segment of goat cheeses, even though it is interpreted in a completely different way to that used by us. Italian cheeses, on the other hand, despite being able to rely on a production of extraordinary fresh and blue cheeses, have a tradition and an aging technique not only linked to ancient customs, but also gradually consolidated over the centuries. In addition, of course, to now being able to count on a range of information and tools intended to further improve quality. As I mentioned earlier, it is the milk that makes the difference whether it is from goat or cow, sheep or buffalo. However, man, with his tradition, with his ability to interpret the product, transforming it according to rules that in some cases are centuries old, impresses a trait of excellence to this production.

This not only sets us apart, but puts us in a completely privileged position, being the only country in the world to count a vast number of unique and exclusive cheese products.

Just think, limiting ourselves to a few examples, of buffalo mozzarella: a cheese that is unique, typical and capable of being worked in a thousand ways; think of the hundreds of types of pecorino cheese: each of them can be traced to micro-zones that can be traced all through the national territory, taking on in the different areas, however, different textures and tastes often capable of making them profoundly different from one another. This great production variety is also, in many cases, supported by an adequate quantity of product and this is the real reason that our cheeses are appreciated all over the world. And it is this appreciation that makes Europe our most important market starting first of all with Germany, followed by Austria and Switzerland and, if the United Kingdom comes in fifth place, it is a surprising fact that France – the nation renowned throughout the world for its cheeses – is the fourth largest market in the world for Italian cheeses. I’m only talking about cheeses that are somehow attributable to the associative system, given that we can also count on many micro-productions which, not having the strength or the interest to organize themselves into consortia, do not yet fully express their potential on an international level. However, this will soon change for the better.”

Date:  March 23, 2021
PREVIOUS PROJECT
New ideas and new projects for the Prosecco DOC of the future
NEXT PROJECT
Alessandro Oteri, when shoes love women and the environment
HOME
Italian Good Living - All rights reserved. Web Agency
To Top
We use cookies on our website to give you the most relevant experience by remembering your preferences and repeat visits. By clicking “Accept”, you consent to the use of ALL the cookies.
Cookie settingsACCEPT
Manage consent