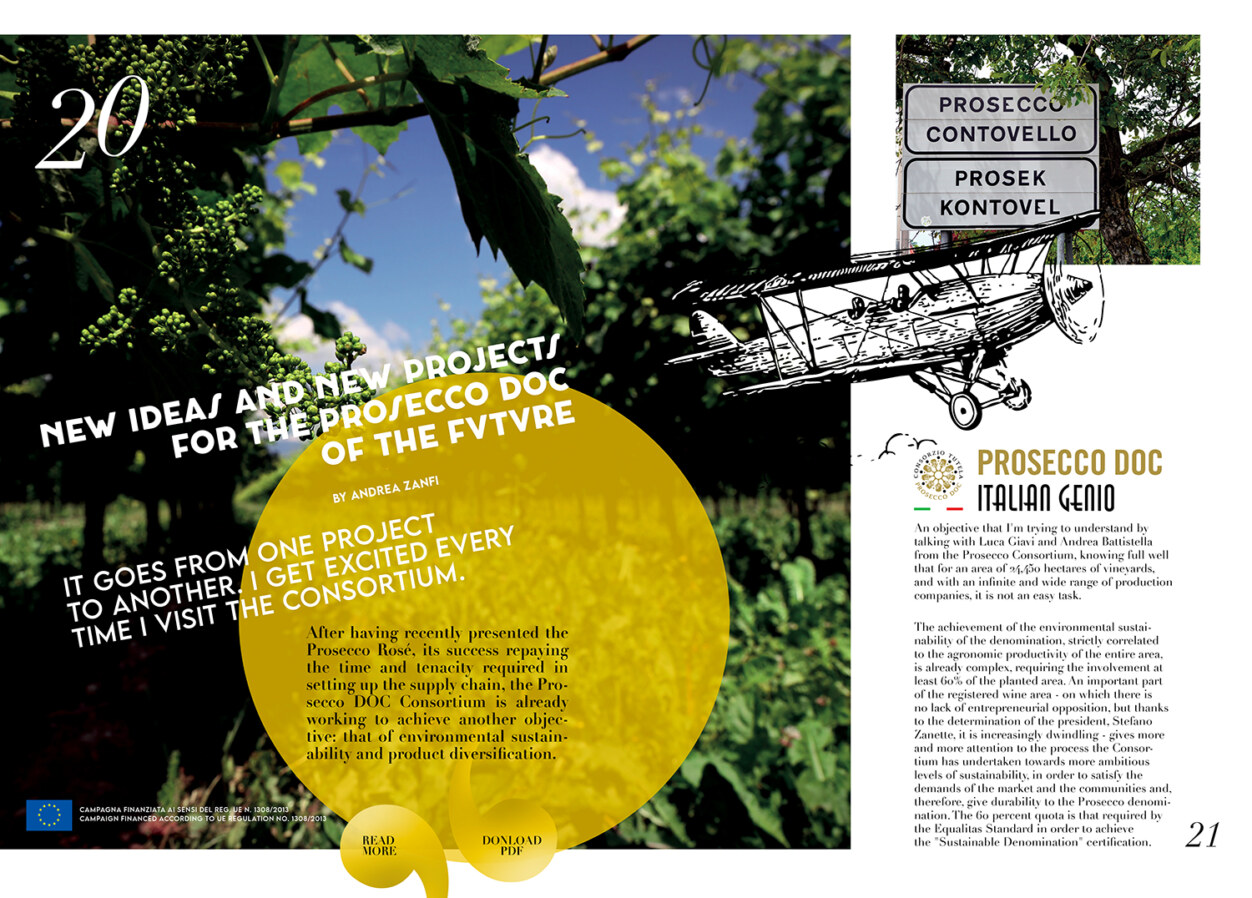 It goes from one project to another. I get excited every time I visit the Consortium.

After having recently presented the Prosecco Rosé, its success repaying the time and tenacity required in setting up the supply chain, the Prosecco DOC Consortium is already working to achieve another objective: that of environmental sustainability and product diversification.

An objective that I’m trying to understand by talking with Luca Giavi and Andrea Battistella from the Prosecco Consortium, knowing full well that for an area of 24,450 hectares of vineyards, and with an infinite and wide range of production companies, it is not an easy task. The achievement of the environmental sustainability of the denomination, strictly correlated to the agronomic productivity of the entire area, is already complex, requiring the involvement at least 60% of the planted area. An important part of the registered wine area – on which there is no lack of entrepreneurial opposition, but thanks to the determination of the president, Stefano Zanette, it is increasingly dwindling – gives more and more attention to the process the Consortium has undertaken towards more ambitious levels of sustainability, in order to satisfy the demands of the market and the communities and, therefore, give durability to the Prosecco denomination.

The 60 percent quota is that required by the Equalitas Standard in order to achieve the “Sustainable Denomination” certification. Extending this idea to 24-25,000 hectares of vineyards is not at all obvious, but from the way they speak about it I understand that the Consortium management is working hard in this regard. As already mentioned, this initiative inexorably involves the entire production chain and is linked to the increase in product quality. A process that will focus on the segmentation and differentiation of the same production, taking advantage of some analyses made by a research pool including Nomisma and Cirve at the University of Padua. If the first action requires patience and involvement of the consortium members, the second could produce a new explosion on the markets, one at least as big as the launch of Prosecco DOC Rosé.

Segmenting the bottles will mean refusing to reduce Prosecco to a single homogeneous mass and the standarization of a wine, but instead introducing distinctions between territories and between Proseccoes themselves, experimenting with grape varieties, viticultural and enological techniques and monitoring the distinctive features of the different areas of the denomination. So in the future two further segmentations could be seen on the market: one linked to the expansion of the production range, which will consider the categories sparkling “spumante”, lightly sparkling “frizzante”, fermentation in the bottle and the various versions from Brut nature to Demi-sec; the other concerns the hypothesis of the variation of the regulations, with the determination of different specifications, from the grape varieties to the sparkling wine making techniques, and the resulting promotion of the old Prosekar in the province of Trieste.

In this sense the Rosé has already been a decisive experiment, with studies beginning in 2017, the modification of the regulations concluded in August 2020 and the sale of bottles beginning in October 2020, reaching the extraordinary number of 17 million in little more than three months. What can we say then?

That I believe that everyone in the Consortium is happy.

And not only from the point of view of volume, but also that of the quality of the wines marketed, whose general qualitative excellence, even of products destined for large-scale distribution, stems from having been able to determine production conditions capable of achieving precisely this quality with the two months of autoclave.

Based on this success and the perception of how important excellence is, the Consortium must therefore start with these two projects, in order to safeguard the value of the Prosecco denomination in the years to come. The difficulty will be in ensuring that the differentiation does not concern only the representative label of the wine while proving to be imperceptible on the palate and nose, as is often the case. Doubts that are dispelled upon discovering that precisely in this sense, the technical sector of the Consortium is proceeding with the mapping of the territory in order to identify, in the complexity of the DOC vineyards, the macro areas homogeneous for characteristics of the grapes and wines, in order to verify the actual differences and, as such, be immediately perceivable by the consumer. Another decisive element, although one still to be defined, could be indigenous yeasts. Until now large  wineries have always preferred to avoid the use of these yeasts, to avoid anomalous fermentations, especially for large volumes of wine. In reality, the University of Padua selected a native yeast, actually called Prosecco, fifteen years ago. Then the usual bureaucratic quibbles made them lose track of it, so much so that I haven’t found anyone who used it. Considering that yeast could substantially contribute to a further organoleptic and sensorial differentiation of wines, perhaps it might be time that this developmental branch was also reprised. But I’ll leave these personal musings aside to focus on product segmentation which requires commitment, time and investment. Considerations that mainly concern Glera, a grape that has to be followed and not simply vinified. In fact, the correct maturation is essential to obtain profiles that are elegant to the nose and balanced to the taste. Another positive aspect, which many wineries are working on, is the choice of starting with the sparkling process from the must, giving the wine a remarkable freshness and elegance that makes it very pleasant in addition to a greater fruity floral bouquet.

The wine, which could be bottled in the summer of the year following the harvest, has the same freshness as the one bottled a few months after the harvest, significantly increasing the drinkability of the product and its possibility of aging, while maintaining its characteristics in the best possible way.

But this new challenge launched by Prosecco DOC will certainly be something to be discussed in the future.

Download the printable version
Date:  March 23, 2021
PREVIOUS PROJECT
The Unexpected magic of a capital rediscovered
NEXT PROJECT
Interview with Cesare Baldrighi, President of OriGIn Italia
HOME
Italian Good Living - All rights reserved. Web Agency
To Top
We use cookies on our website to give you the most relevant experience by remembering your preferences and repeat visits. By clicking “Accept”, you consent to the use of ALL the cookies.
Cookie settingsACCEPT
Manage consent