Italian Good Living | The Unexpected magic of a capital rediscovered 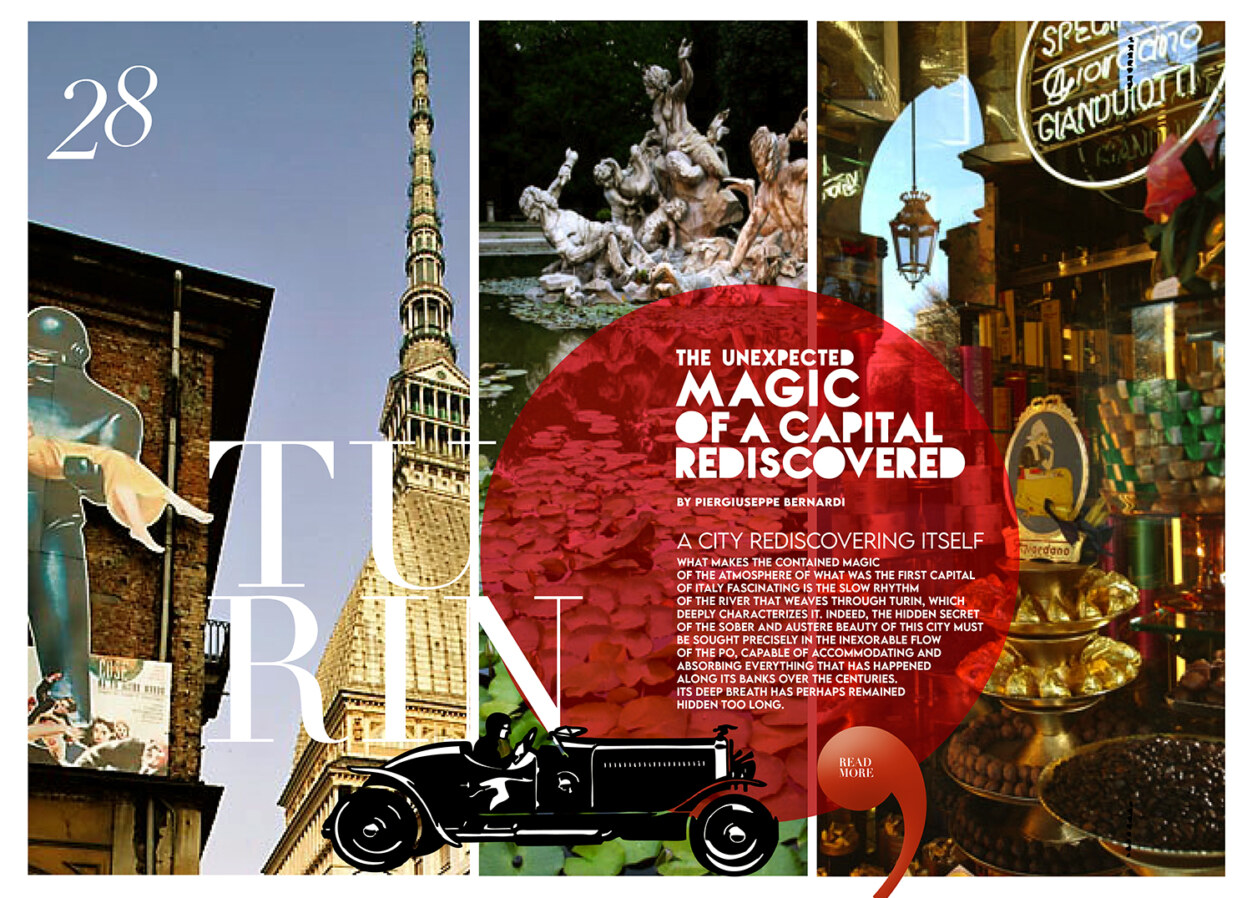 The Unexpected magic of a capital rediscovered

A city rediscovering itself

What makes the contained magic of the atmosphere of what was the first capital of Italy fascinating is the slow rhythm of the river that weaves through Turin, which deeply characterizes it. Indeed, the hidden secret of the sober and austere beauty of this city must be sought precisely in the inexorable flow of the Po, capable of accommodating and absorbing everything that has happened along its banks over the centuries. Its deep breath has perhaps remained hidden too long.

The city has nevertheless recovered it only in the last decade, suddenly returning to shine thanks to a revival that started with the 2006 Winter Olympics. It was this event, managed with Savoy foresight, that allowed Turin to overcome its limiting classification as the automobile capital. In this way, a new season has opened for Turin, characterized by a rethinking of its own identity in a way more linked to culture and art. If so, on the one hand, the International Book Fair found new vitality, on the other a growing success was recorded by Artissima. While the Salone del Gusto, which this year has become a true widespread event linked to different parts of the city, has made a strong contribution to making the city known as the capital of a first-rate food and wine territory.

The splendor of the palaces of a little Paris

You will feel the measured heartbeat that moves Turin, restored to its former glory, firstly in the royal residences that punctuate both the city center and its surroundings. From the Palazzo Reale (Royal Palace) to the Reggia di Venaria, from the Valentino Castle to the Stupinigi Hunting Lodge, from Palazzo Carignano to the Rivoli Castle, everything here seems to evoke a great past that centers around the House of Savoy. The latter, naturally linked to the French court, appears to have been constantly engaged in an effort to beautify the city, aimed at making it more and more prestigious through an urban planning that is obviously modelled on Paris, whose architecture and atmosphere are sometimes glimpsed in corners of the subalpine capital. Turin, whose “French” trait obviously appears unattributable to Parisian grandeur, can be identified by the sense of industrious and reserved calm that can be felt in its streets and squares, even though the city has been struggling with a visibly growing tourist flow for some years. Turin therefore – and this is certainly a value that is anything but irrelevant – appears a complete stranger to the frenzy of large metropolises, with the benefit of a liveability that makes it a city on a human scale, immersed in an articulated system of green areas and crossed by cycle paths that allow you to experience it from an unusual perspective.

The visionary creativity of Savoyard rigor

Perhaps the attitude of the people you meet, especially when compared to other Italian cities, may seem to be characterized by a shade of coldness. Don’t worry. It is only the proverbial Piedmont reserve, probably more marked in Turin than elsewhere. As soon as some empathy emerges, you will be surprised to see this apparent detachment dissolve, instead making way for a feeling of authentic and warm hospitality. To perceive all the tension that is determined in the Turin soul between sober caution and experimental shrewdness, do not simply let your gaze get lost in the interplay of architecture created by the intersection of noble palaces. Dwell on their lines and surrender to them. Especially to the Antonelli buildings, from the fascinating “polenta slice” houses to the slender Mole, you will discover a Turin in which ancient and modern dwell perfectly together. You will also see a potent sign of this Turin in two museums that have recently become powerful tourist attractions: on one side the futuristic Cinema Museum, whose establishment within the very symbol of the city testifies to the almost visionary creativity hidden in the rigor of those who live in these lands; on the other, the fascinating Egyptian Museum, whose recent rethinking has made it one of the most visited permanent exhibition structures in Italy. And, if you are passionate about architecture, it will also be worth visiting via Alfieri 6: here you will see a finely-restored seventeenth-century building, declared by the prestigious international magazine “Archdaily” as the winner of «the most beautiful house in the world» competition.

The persuasive strength of an exceptional cuisine

Even a dinner at the historic Del Cambio restaurant, one of Cavour’s favorite places, or at the newly founded Piano 35, where you can enjoy the lights of the city from the terrace of the San Paolo skyscraper, will be a way to experience Turin and grasp its mystery. However, to savor the authentic tastes of its cuisine, sit in the dehors of the Scannabue restaurant on a sunny day, right in the heart of San Salvario: the Parisian atmosphere will help bring out the full flavors of the veal with tuna sauce and the “finanziera”surprising you with boldness and originality. If, on the other hand, you decide to keep things lighter, without forgetting that this early evening ritual already represented a rather widespread habit for the Turinese from the end of the eighteenth century, treat yourself to an aperitif. Sit at one of Bar Elena’s outdoor tables and, looking at the Gran Madre and the Monte dei Cappuccini whose differing heights form the backdrop to Piazza Vittorio, slowly sip a straight “Vermouth”, bearing in mind that you are in one of Cesare Pavese’s favorite places. It will be a moment all yours and you will discover the intense flavor of a wine, fortified and characterized by absinthe, created in Turin and which subsequently became a very fashionable label throughout Italy from the early nineteenth to the mid-twentieth century. And if instead you would prefer to experience the undoubted creativity of the local barmen, find your way to the Lobelix Cafè in Piazza Savoia: there will be no table service, but in return drinks and snacks will leave you wanting to come back.

The “sweet” features of an austere city

However, do not think that you have gleaned the authentic flavor of Turin without having tasted the sweet version. Start your journey of discovery with coffee. You will be able to perceive its traditional aromas from a cup, ritually accompanied by a glass of water here, in historic cafes such as Mulassano and Platti, veritable treasure troves where wainscoting and mirrors pursue each other, enhancing each other. However, you can also taste very refined versions in experimental laboratories such as Orso. In its slightly retro rooms near Piazza Madama Cristina the exploration of single-origin coffees and the search for the right alchemy of blends are pursued with a tenacious and meticulous commitment. And don’t forget about chocolate, whose love affair with Turin has endured since the sixteenth century. To taste the latest evolutions of this delicacy, stop at Guido Gobino’s artisan chocolate shop in Via Lagrange: let yourself be caressed by the captivating persuasion of his gianduiotti and cremini still produced in the traditional way or by the simplicity of the wafers interpreted in versions that explore the chocolate from the sweetest of sweet to the most bitter of bitter. And don’t forget to go and taste the extraordinary “bicerin” in the café of the same name in front of the Consolata sanctuary. It will be a way to take with you a lasting memory of this magical city at the foot of the Alps.

University teacher and freelance journalist, he is interested in philosophical aesthetics and figurative arts, themes on which he has written several essays. With the excuse of better knowing the different places where his work takes him, he has transformed his passion for good food and quality wines into an opportunity to talk about the tastes and flavors that he finds himself discovering from time to time, contributing to various magazines.

Date:  March 23, 2021
PREVIOUS PROJECT
Spritz against everyone
NEXT PROJECT
New ideas and new projects for the Prosecco DOC of the future
HOME
Italian Good Living - All rights reserved. Web Agency
To Top
We use cookies on our website to give you the most relevant experience by remembering your preferences and repeat visits. By clicking “Accept”, you consent to the use of ALL the cookies.
Cookie settingsACCEPT
Manage consent