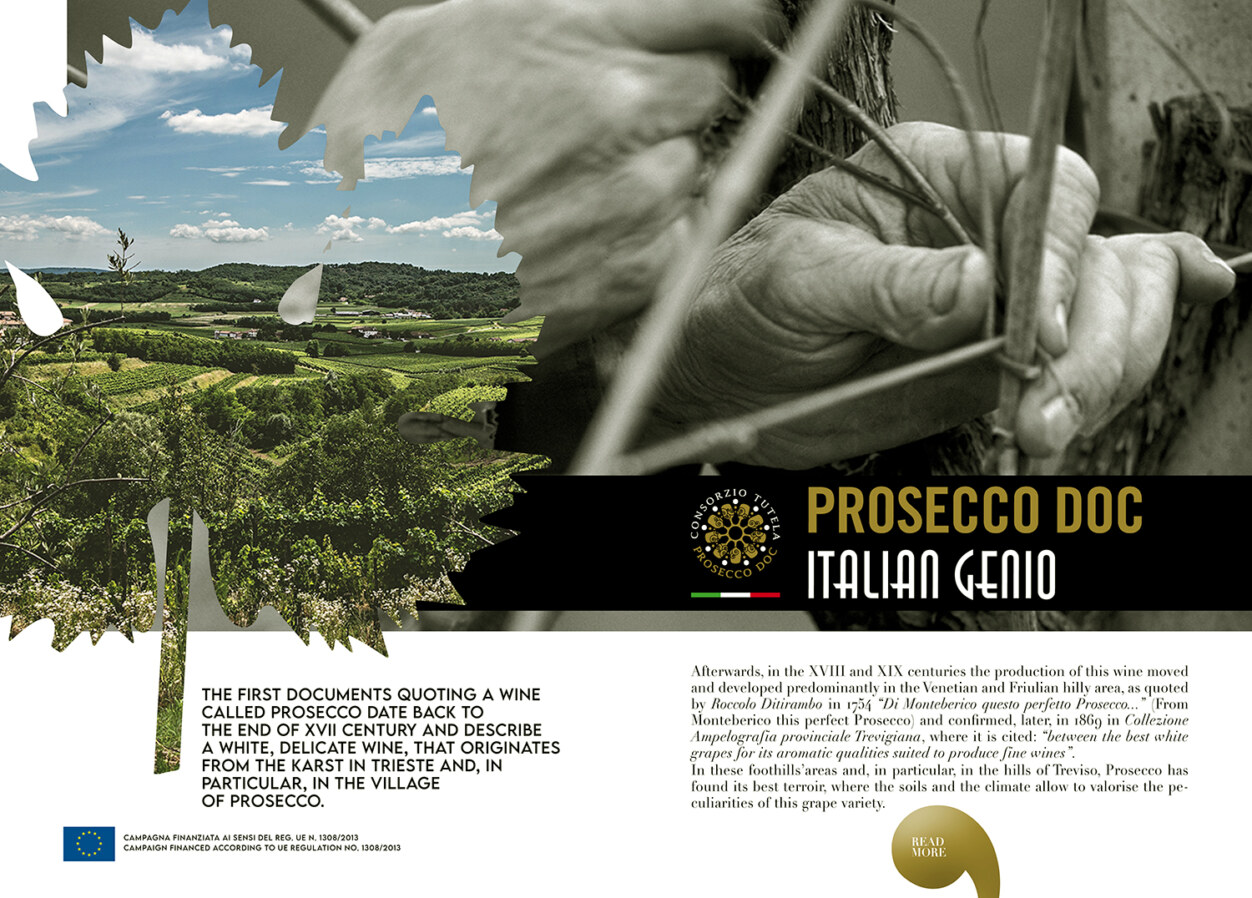 The first documents quoting a wine called Prosecco date back to the end of XVII century and describe a white, delicate wine, that originates from the Karst in Trieste and, in particular, in the village of Prosecco.

Afterwards, in the XVIII and XIX centuries the production of this wine moved and developed predominantly in the Venetian and Friulian hilly area, as quoted by “Roccolo Ditirambo” in 1754 “Di Monteberico questo perfetto Prosecco …” (From Monteberico this perfect Prosecco) and confirmed, later, in 1869 in “Collezione Ampelografia provinciale Trevigiana”, where it is cited: “between the best white grapes for its aromatic qualities suited to produce fine wines”.

In these foothills’ areas and, in particular, in the hills of Treviso, Prosecco has found its best terroir, where the soils and the climate allow to valorise the peculiarities of this grape variety.

The success of Prosecco is given by the characteristics of its geographical area and by the abilities of the operators to develop adequate techniques for the second natural fermentation, in the bottle first and in autoclaves later, since the beginning of the XX century, as it is quoted in documents of 1937 “Prosecco (…) messo in botte si vende all’inizio della primavera destinandolo alla bottiglia ove riesce spumante” (Prosecco put in the barrel is sold at the beginning of spring and in the bottle when it is sparkling”.

In the last century, a high-tech and scientific professionals’ network developed in the area, to refine the production and elaboration methods of Prosecco, allowing to exalt its characteristics, for which it is recognised and appreciated by national and international consumers. The ability of operators in experimenting and improving the technologies for the vinification and the sparkling-making of Prosecco, preserving the grapes’ scents in the aromatic profile of the wine, has been decisive.

In conclusion, Prosecco is both an ancient and modern wine and it satisfies at the same time the values of simplicity and of refinement: this is the characteristic that distinguishes it from the other wines.

The Designation of Origin and the Consortium

The Designation of Controlled Origin Prosecco was born in 2009 from the union of vine-growers, winemakers, and bottlers of 9 provinces between the regions Veneto (Treviso, Belluno, Padova, Venezia and Vicenza) and Friuli-Venezia Giulia (Gorizia, Pordenone, Trieste and Udine) in order to link indissolubly this wine to its territory of origin.

Therefore, Prosecco represents a territory with specific rules collected in the production specifications, determining all the supply chain steps: from the definition of the production area to labelling.

The DOC requires compliance verification with the rules laid down in the specification, thanks to a third party’s intervention that certifies the Prosecco product only when all the requirements are met, especially those relating to consumption characteristics.

The Consortium’s aim is to guarantee the quality of the product and protect consumers, but also to valorise the production through the promotion and the protection of the Designation Prosecco in Italy and abroad.

In 2020, 500 million of bottles have been produced and the 77.8% has been sold abroad. The main markets covering about 2/3 of the export are: UK, USA and Germany. The fourth country is France. Prosecco DOC is produced in the Sparkling, Semi-Sparkling (also with second fermentation in the bottle) and Still versions. The Sparkling typology is the most appreciated and, according to the sugar residue, is produced in the Brut Nature, Extra Brut, Brut, Extra Dry, Dry and Demi-sec versions. Since the 11th of August 2020, the amendment of the production regulation for the introduction of the Rosé typology has been approved. Prosecco DOC Rosé is produced only as Sparkling in the driest versions, from Brut Nature to Extra Dry. In 2020 16.8 million of bottles have been bottled by 111 sparkling houses, corresponding to 31.139 hl, that is the 3.4% of the total production of Prosecco DOC. It is estimated that by the 31st of December 2021 the number of bottles bottled and sold will double, reaching about 40-50 million of bottles. 80-85% of the production is destined to export, mainly in the following markets: USA, UK, Canada, Scandinavia, France, and South-East-Asia.

The term Prosecco DOC recalls the territory of production of an extraordinary wine, whose origin is in a little town near Trieste, called Prosecco. Covering 24,450 hectares of vineyards between Veneto and Friuli-Venezia Giulia, Prosecco is obtaining so much success that it conditionate the touristic fluxes of the consumers, that, once they fall in love with the product, they leave to discover its territory of origin.

The territory of origin is generous for the cultural and gastronomic offer and is particularly beautiful: the vineyards alternate with woods, meadows, villages and enchanting cities. From the Dolomites to the Venice Lagoon, passing through the Palladio’s Villas and the pre-Roman towns like Aquileia.

Not by case, there are 12 sites classified as UNESCO World Heritage, underlining the international vocation of this great region, crossroads between cultures and peoples.

Let us inspire you with our tips to enjoy the best of Italian living.

Date:  March 17, 2021
PREVIOUS PROJECT
Live Italy physically!
NEXT PROJECT
Procida will be the 2022 Italian Capital of Culture
HOME
Italian Good Living - All rights reserved. Web Agency
To Top
We use cookies on our website to give you the most relevant experience by remembering your preferences and repeat visits. By clicking “Accept”, you consent to the use of ALL the cookies.
Cookie settingsACCEPT
Manage consent