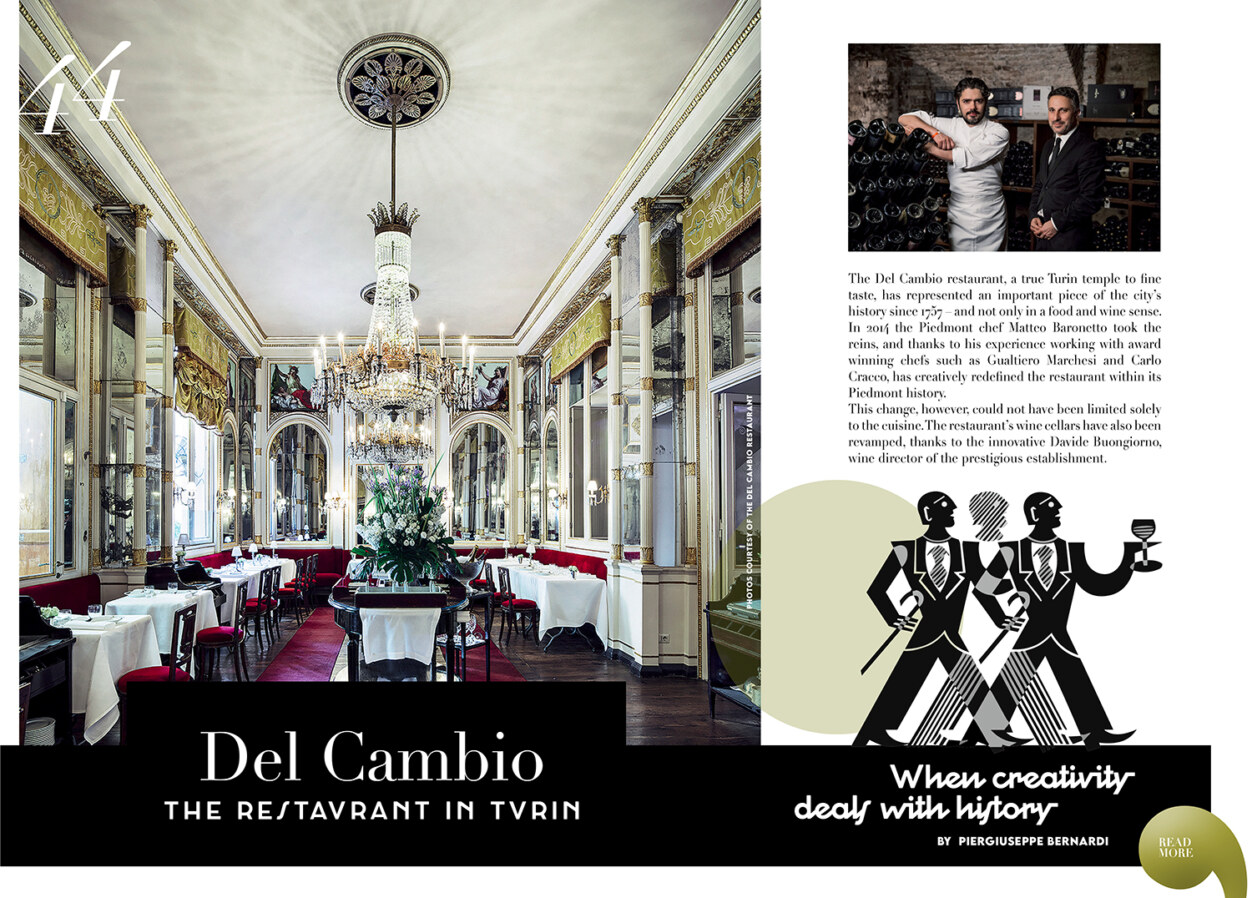 Del Cambio the restaurant in Turin

The Del Cambio restaurant, a true Turin temple of fine taste, has represented an important piece of the city’s history since 1757 – and not only in a food and wine sense. In 2014 the Piedmont chef Matteo Baronetto took the reins, and thanks to his experience working with award winning chefs such as Gualtiero Marchesi and Carlo Cracco, has creatively redefined the restaurant within its Piedmont history. This change, however, could not have been limited solely to the cuisine. The restaurant’s wine cellars have also been revamped, thanks to the innovative Davide Buongiorno, wine director of the prestigious establishment.

When creativity deals with history

The Del Cambio restaurant, a Turin temple of taste, has represented an important piece of history since 1757 in the city that was the first capital of Italy – and not just for food and wine. Even today, dining in its prestigious rooms made of old-fashioned wainscoting and mirrors, timeless floors and chandeliers, there is the impression of being cast back for a moment into a world now lost: a world that over the centuries has seen not only Camillo Cavour in these rooms, but also other heterogeneous myths of the past such as Eleonora Duse and Maria Callas, Honoré de Balzac and Giuseppe Verdi, Friedrich Nietzsche and Giacomo Puccini.

And perhaps it would have remained forever a prisoner of this magical spell, if not for the arrival of a chef that could free it from the paralysis that enveloped it. A chef with experience at the Michelin starred tables of Gualtiero Marchesi and Carlo Cracco, a Chef with a strictly Piedmont DNA: Matteo Baronetto.

From April 2014 it would be Baronetto who would provide the Del Cambio restaurant with a turning point, whose step by step approach could only naively be OPPURE mistaken for maintaining the now syncopated status quo. This turning point, beginning in the kitchen, would set it on a path that was as risky as it was ambitious: to redefine, from a creative perspective, the whole Piedmont history of the place. Now, over four years later, if you have the opportunity to sit at one of the tables in the Del Cambio restaurant, you will no longer have any doubts about the success of the operation: even if you limit yourself to a very classic veal with tuna sauce or traditional Piedmont agnolotti, you will soon realize that behind the overly sober names of these dishes there has been an exceptional and skillful reworking, even if deeply animated by that Savoy trait that manages to impress with substance, rather than with special effects.

However, this turning point could certainly not have been limited to the kitchen. It would be impossible to relaunch without really rethinking the entire cellar. And this is where the volcanic Davide Buongiorno, wine director of the prestigious restaurant, comes in, immediately tuning in to Baronetto’s philosophy and relaunching the wine to make it one of the inescapable protagonists of the Del Cambio restaurant’s path: by putting in order the almost 20,000 bottles crowded along the beautiful brick walls of the recovered underground cellars; by devising a wine list in line with the new challenge at hand; and above all by creating – in the magical twilight of the long and narrow corridor where “the cellar table” has found its place – real events aimed at growing the authentic culture of wine, via tastings of prestigious labels accompanied by dishes specially designed to enhance them.

Baronetto’s dishes and Buongiorno’s wines, while decisive in the dynamic relaunch strategy of the Del Cambio restaurant, are only the beginning of a project with a much more articulated and complex objective. One that has now led this place to transform itself into a real Maison, also equipped with a unique Drinks laboratory where, in addition to being able to buy ready-made take-away meals created by the restaurant’s own kitchen, you can also enjoy an excellent aperitif in the rarefied atmosphere of one of the most fascinating squares in Turin. Precisely that Turin which must once again become the effective and legitimate food and wine capital of a territory capable of establishing itself in the last decade as one of the “places of taste” most appreciated by national and international tourism. And this is evidently the ultimate goal of the project with which Baronetto intends to lead the way through the creation of the Maison Del Cambio.

Date:  March 23, 2021
PREVIOUS PROJECT
ROSSORUBINO
NEXT PROJECT
Quality in the name of joy
HOME
Italian Good Living - All rights reserved. Web Agency
To Top
We use cookies on our website to give you the most relevant experience by remembering your preferences and repeat visits. By clicking “Accept”, you consent to the use of ALL the cookies.
Cookie settingsACCEPT
Manage consent