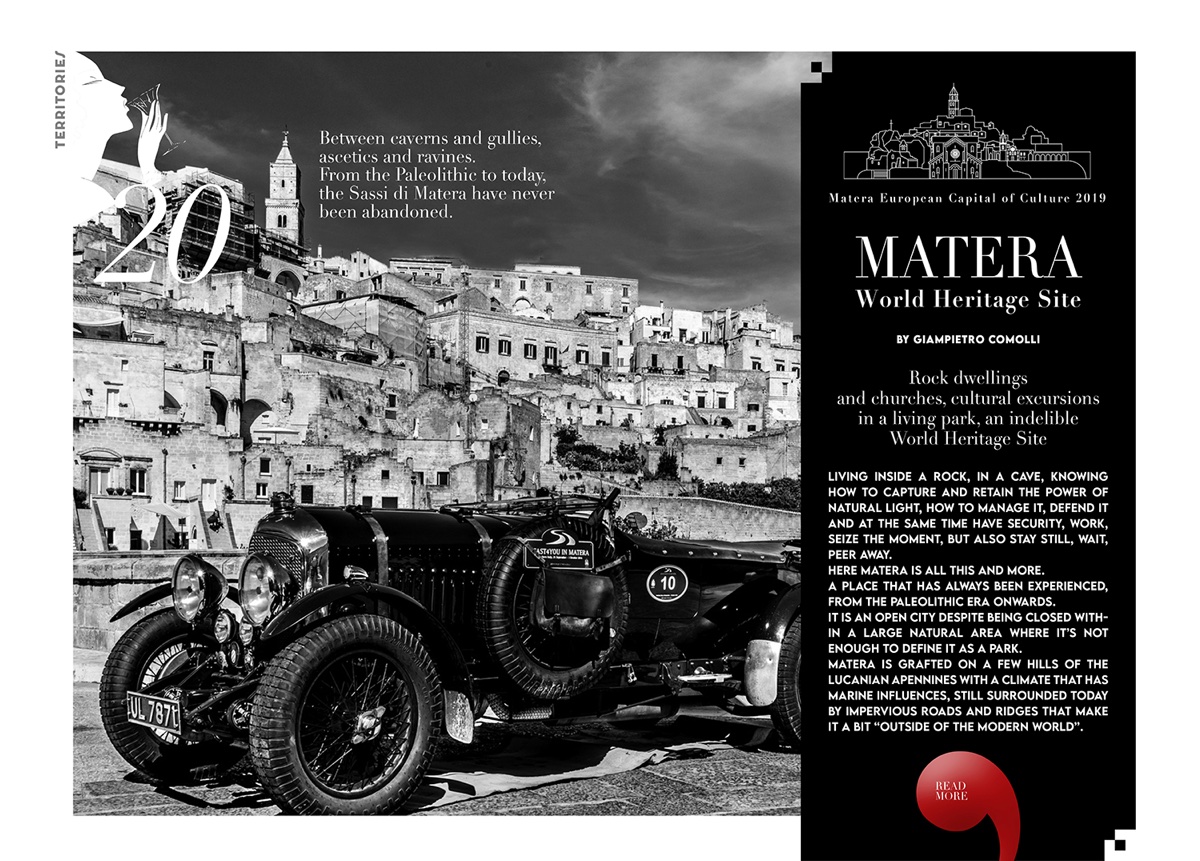 Living inside a rock, in a cave, knowing how to capture and retain the power of natural light, how to manage it, defend it and at the same time have security, work, seize the moment, but also stay still, wait, peer away. Here Matera is all this and more. A place that has always been experienced, from the Paleolithic Era onwards.

It is an open city despite being closed within a large natural area where it’s not enough to define it as a park. Matera is grafted on a few hills of the Lucanian Apennines with a climate that has marine influences, still surrounded today by impervious roads and ridges that make it a bit “outside of the modern world”.

Living there is difficult but unique, absolute, priceless. Some might say that it makes people jealous. Evidence of the life of ancient and modern man is everywhere… you have to be careful not to step on anything, not to miss one single colour or image. It is the kingdom of botanists and zoologists, hikers, landscape architects, historical archaeologists, geographical historians and landscape enthusiasts, a treasure chest of biodiversity over about 8,000 pristine hectares. This is where UNESCO found the symbol of the world, the unique heritage, the absolute example of the relationship between man and earth, understood as a planet, not just as an area. This is where we can discover how our ancestors lived and how, without technical knowledge, the choice of where to live and cultivate was always the right one, more complete, safer and more “inherent” with the historical moment, and we mean over millennia! This is where you can discover how to preserve an area even if people live there and come for visits, so it is not frozen and forbidden.

The culture of the area must be lived in, admired, even touched – especially the natural and environmental one – to be handed down, made known. This is where we can understand how civic education, respect for the common good, solidarity, sustainability are not just words written in school books, on elementary school desks… which you then forget… or which then the teachers forget to teach… to understand how the relationship between things and people, between people and animals, between neighbours is more than anything else based on the recognition of reciprocity, rights and duties and respect. Two attractive elements can help us: the combination so unified in diversity and so emblematic within the Sassi di Matera today with its noble palaces, a sign of wealth, of a period of thriving artisanal, manufacturing and agricultural activity in recent centuries, those of the Lanfranchi, Ferrau, Santori, Malvezzi. But if not more important and even more representative is the existence, sometimes very minimal, sometimes wonderfully colourful and significant, of the rupestrian religious remains that emerged over the millennia between the Sassi, Matera and the surrounding area. There are workshops, frescoes, religious and faith symbols from the medieval 800s to 1700 that illustrate how the peoples of the Sassi, over time, were very tied to mystical facts and different liturgies, to small, very simple churches. The Murgia Materana park has several hermitages carved into the rock, which were created for or became places of worship. Today it is possible to visit and see many of these churches or parishes along trekking routes that combine excursions, leisure, culture and art. All of the elements between the Sassi and Matera are easy to discover even without guides, but only by passing, for example, from Mount Belvedere along the Gravine, exploring the park and remaining on the edge between caves and gullies. The title of Unesco and European Capital are further reflections of the uniqueness, rarity, inalienability and eternity of the excavated town, underground entrances and corridors, underground churches and monuments, wedged between transit routes and channels with running water.  Entering the Sassi di Barisano and Caveoso is something you experience as a caver rather than as a tourist; each of us becomes a curious researcher, it is a journey from human prehistory to the present day, with homes from back then and the present day. With our tour, the cathedral of Matera from 1270 is worth a visit, located between the two Sassi, in an elegant Apulian Romanesque style, with a classic sixteen-ray external rose window and various mosaics. The itinerary of faith wanders from the convent of Sant’Agostino to the crypts in the districts, from San Giovanni in Monterrone to the chapel of San Giuliano located on the edge of the lake formed by the Bradano river, from San Nicola dei Greci to the convicinio of Sant’Antonio to arrive to the Ofra monastery and the Monaci park. But… but Matera is also food, recipes, dishes, and gastronomic and typical specialties.

In Matera you eat good, rustic, simple, specific things like Crapiata, or a dish of legumes and slow cereals almost in brovo, the symbol of the feast on 1st August of each year in the village of La Martella. Another absolute exclusive is the Ciandella, a historical recipe of the purest, most canonical Mediterranean diet, based on oregano, onion, tomatoes and peppers of various sizes and colours, cooked in salted water for a long time and then ladled onto the very stale bread of Matera, which is made with only small red durum wheat flour. You could say that a corner of history and the origins of the famous Mediterranean diet, which has also become part of the Unesco heritage, are also on the Lucanian hills and among the Sassi di Matera.

Date:  December 1, 2020
PREVIOUS PROJECT
Winemaker for a Day
NEXT PROJECT
Polenta is an icon of Italian gastronomic culture
HOME
Italian Good Living - All rights reserved. Web Agency
To Top
We use cookies on our website to give you the most relevant experience by remembering your preferences and repeat visits. By clicking “Accept”, you consent to the use of ALL the cookies.
Cookie settingsACCEPT
Manage consent