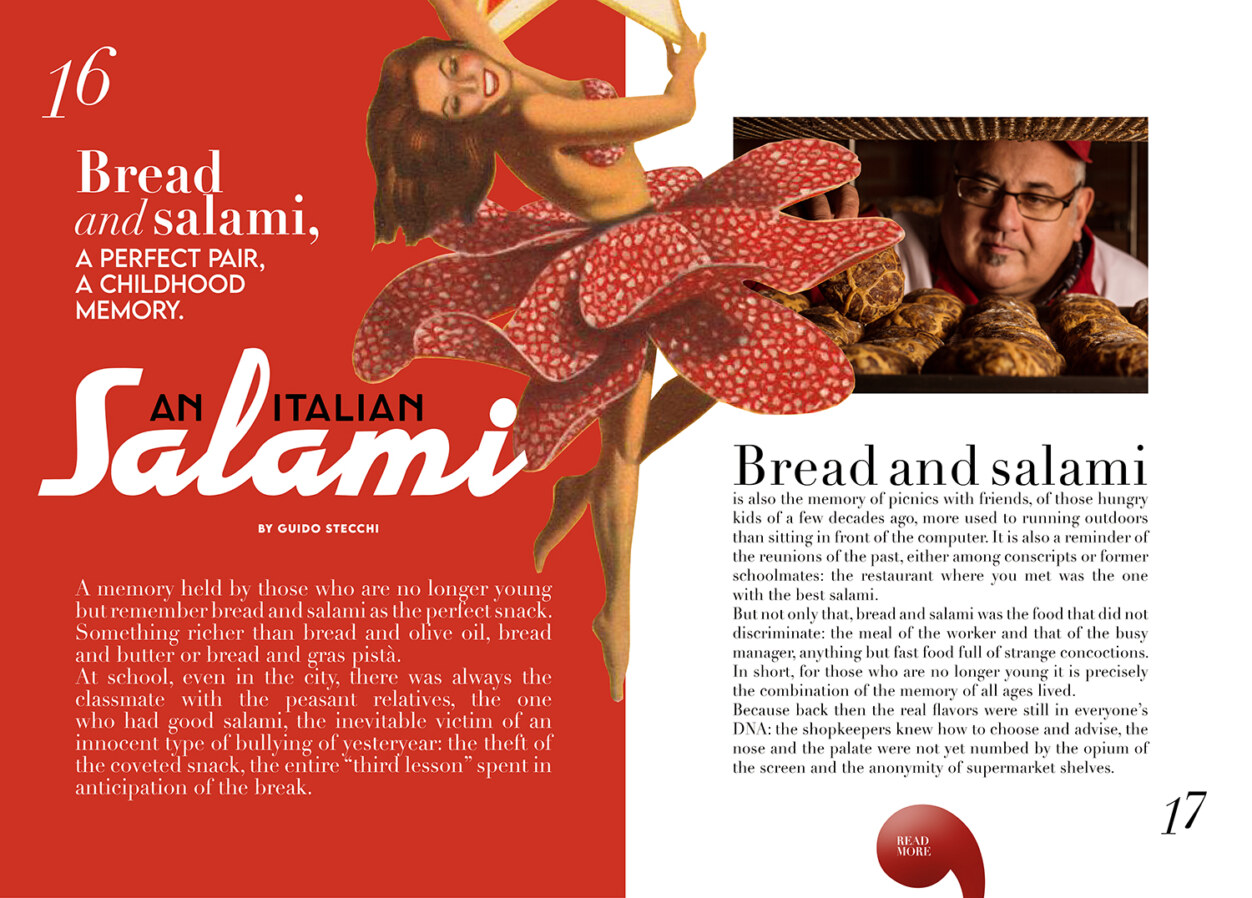 Bread and salami, a perfect pair, a childhood memory.

A memory held by those who are no longer young but remember bread and salami as the perfect snack. Something richer than bread and olive oil, bread and butter or bread and gras pistà.

At school, even in the city, there was always the classmate with the peasant relatives, the one who had good salami, the inevitable victim of an innocent type of bullying of yesteryear: the theft of the coveted snack, the entire “third lesson” spent in anticipation of the break.

Bread and salami is also the memory of picnics with friends, of those hungry kids of a few decades ago, more used to running outdoors than sitting in front of the computer. It is also a reminder of the reunions of the past, either among conscripts or former schoolmates: the restaurant where you met was the one with the best salami.

But not only that, bread and salami was the food that did not discriminate: the meal of the worker and that of the busy manager, anything but fast food full of strange concoctions. In short, for those who are no longer young it is precisely the combination of the memory of all ages lived.

Because back then the real flavors were still in everyone’s DNA: the shopkeepers knew how to choose and advise, the nose and the palate were not yet numbed by the opium of the screen and the anonymity of supermarket shelves. In fact, some industrial salamis glorified by the commercials, and more fake than those drawn by Iacovitti (an Italian comic artist famous for his surreal drawings of salami), were delicious and healthy – apart from a few blemishes – until the families who produced them sold their names or the names of their artisanal grandparent butchers to the big producers of today.

Healthy, of course, because aging made, and should make meats, including the fat, healthier and lighter: in every region traditional cured meat recipes are the result of ancient wisdom, balanced in accordance with the environment, the climate, lifestyle…

Although maybe with today’s lifestyle we could eat a little less.

They are also in perfect harmony with the much praised – and rightly so – Mediterranean diet, the one recognized by Ancel Keys and glorified by UNESCO. It is not the diet interpreted unilaterally by nutritionists but the one that includes a lifestyle dictated by the atavistic peasant culture that cannot overlook the sacrifice of the pig whose gifts – including a salami seasoned to the right point – influence the convivial moments of the entire year: the ordered celebrations, the threshing, the grape harvest, the olive harvest…

Instead, for the children of the “ready-made snack” generations, a bread roll with salami is no longer the daily snack – unfortunately. However, it is something that everyone likes.

And salami is still a point of gluttony even for the older ones, perhaps as an excuse for an hour with friends in a wine bar, served on a board with some slightly strange bread.

But do the genuine salamis of the past still exist ie. are they still a healthy snack today?

Is it still compatible with our health and our children’s healthy development? A terrible question, right?

This is what the Academy of the 5Ts asked itself. There is no doubt that these days there are certain flavors that those with a few years behind them (not too many, fifty’s enough) remember as part of their daily diet that are no longer found around the corner; you have to go looking for them. The salamis we find everywhere are no longer made only of meat, fat, salt, natural flavourings, namely spices, garlic and wine, but also contain many other things that are either chemicals or are added for what on earth we don’t know (such as milk powder and various sugars), if not to give the idea that they have been aged longer or to disguise low-quality meat.

And the texture, the scent, the taste are something else entirely. And often the hours after a meal or snack are also quite another thing: a bit of a headache, an upset stomach… Thus, lovers of good and genuine food have come to the point of getting excited when they come across a salami that tastes like salami when wandering through the countryside and restaurants. It might not be exactly the same as those they remember, because even if the recipe and the butcher’s passion haven’t changed, pigs are rarely the same.

And so to answer that unfortunately rhetorical question, the Academy of the 5Ts created a “championship” in 2005, looking for a tangible way to bring real artisans and their real salamis into the spotlight and, with their help, re-educate the sleeping palates of too many consumers. And it has succeeded, or rather, little by little it is succeeding: many butchers have emerged from their villages; butchers who still have the desire and the ability to work according to nature, letting the meats mature nature’s rhythms with the help of the microorganisms that have always done this work, of the just-right air humidity, of seasonal cycles, and above all, with a lot of patience.

Thanks to juries in the light of the sun, and in the presence of groups of students, because the goal is educational above all, the competition has become, with the patronage of the relevant ministry, the Italian Salami Championship which, at closer look, coincides with a World Championship.

The final in Pescara, conclusion of a cycle of work that occupied all of 2019, hosted by the prestigious Spumantitalia event, was the culmination. Curiously, at an event dedicated to wine, it was also a question of vintage for salami, a great vintage. The top places on the podium were taken by a Veneto pink pork salami and an Abruzzo black pork salami, but all 48 candidates, representing 14 regions, were (indeed, they are) masterpieces of this ancient art. They all offer sensations not only to the nose and palate but also to the spirit, because they are a compendium of the biodiversity and the cultural diversity of Italy: shapes, colors, smells, different flavors, different stories, even different names – because until a few decades ago the word “salame” meant practically nothing except in the north (where there are also sopresse, mariole, mortandele, pitine…) – elsewhere they are called mortadella, soppressata, finocchiona, salsiccia, ventricina, ciauscolo, even “coglioni”… but they are still salami, foods of memory and, we hope, also foods of the future.

Date:  March 23, 2020
PREVIOUS PROJECT
Between heroism and high quality
HOME
Italian Good Living - All rights reserved. Web Agency
To Top
We use cookies on our website to give you the most relevant experience by remembering your preferences and repeat visits. By clicking “Accept”, you consent to the use of ALL the cookies.
Cookie settingsACCEPT
Manage consent