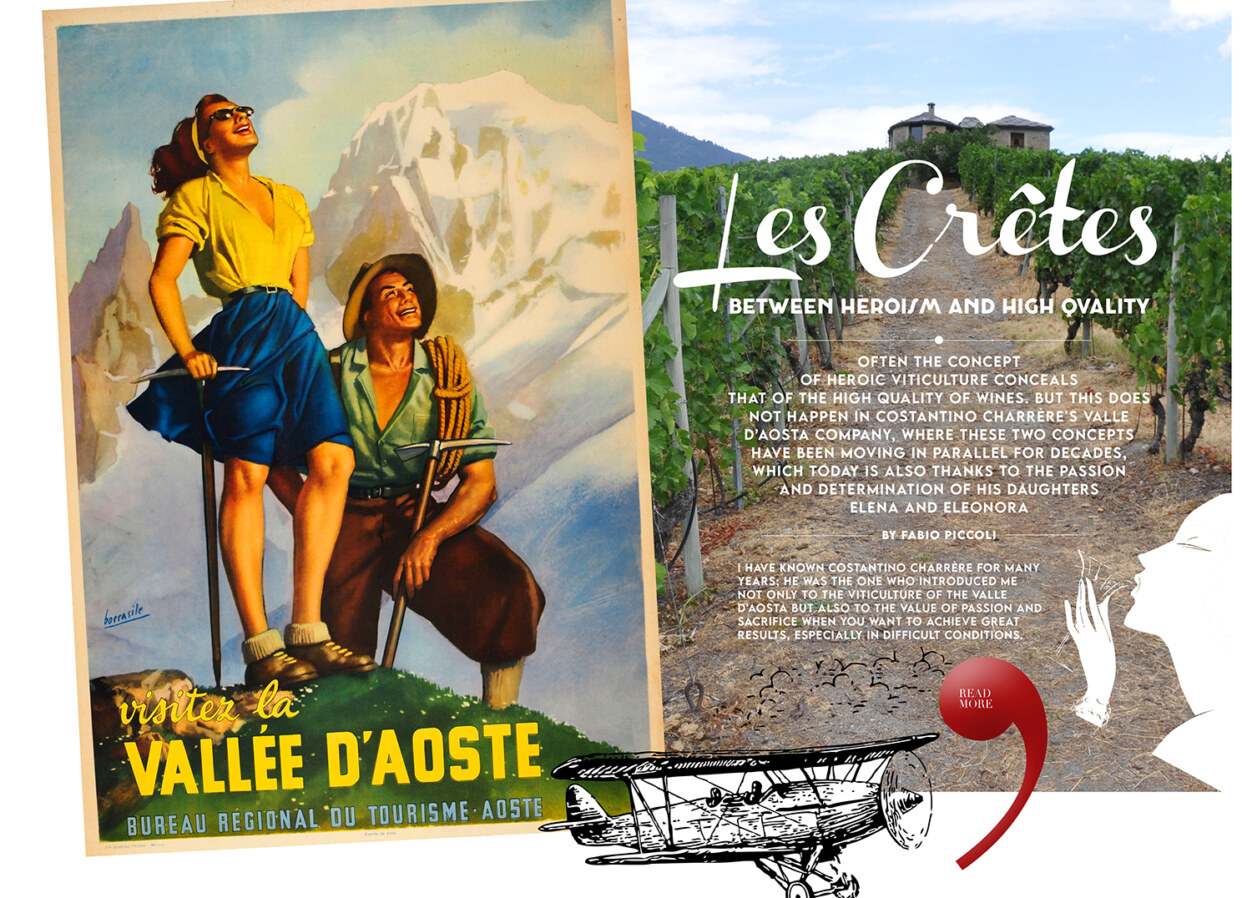 Between heroism and high quality

Often the concept of heroic viticulture conceals that of the high quality of wines. But this does not happen in Costantino Charrère’s Valle d’Aosta company, where these two concepts have been moving in parallel for decades, which today is also thanks to the passion and determination of his daughters Elena and Eleonora

I have known Costantino Charrère for many years; he was the one who introduced me not only to the viticulture of the Valle d’Aosta but also to the value of passion and sacrifice when you want to achieve great results, especially in difficult conditions.

Yes, because now talking about heroic viticulture is a kind of fashion but if there had not been people like Costantino this “heroism” would never have emerged in such a strong and clear way.

Today Constantino is no longer able to make his voice heard clearly because of one of those unfortunate conditions that sometimes affect the best characteristics a person can have.

But his words, however, continue to echo in the mountains he planted with vines thanks to his daughters, Elena and Eleonora, who not only took up the baton in the company but also acquired a real passion and determination, which can’t be taken for granted in many new generations.

The fiery Elena and the calmer Eleonora welcome us. They are joined by Giulio Corti, Elena’s partner, who today holds numerous responsibilities within the well-known Valle d’Aosta company. He has plenty of experience in some of the most important Italian wine companies and an interesting wine-making project in Sardinia.

The meeting with Les Crêtes was decidedly rich, full of food for thought and with the opportunity to taste practically the entire extraordinary range the company offers.

A tasting that we were able to enjoy inside the “Rifugio del Vino”, which is one of the most beautiful reception places I have ever seen, that was designed by the talented Valle d’Aosta architect Domenico Mazza and rightly awarded with a special mention in the international “Le Cattedrali del Vino” (The Cathedrals of Wine) competition that is run by the Gambero Rosso magazine, a collateral event during the prestigious Venice Biennale.

But above all, the visit to the Charrère family’s fine company allowed us to immerse ourselves in one of the most evocative and original vineyard landscapes in our country.

In fact, among the many merits, heroic viticulture also has the benefit of bringing to life rural mountain areas that otherwise would not have been able to experience their current importance, both from a landscape and environmental point of view, but also from an economic point of view.

Elena, Eleonora and Giulio immediately wanted to take us to the mythical hill of Côteau la Tour, with its suggestive medieval tower on the summit, which today is used by the company for events, but which was inhabited by a hermit from the village until the last century.

Seeing the view from the Tower is simply fantastic and gives you an even better idea of the sense of heroic viticulture as well as the production philosophy of Les Crêtes, because some of this company’s oenological gems are obtained from these vineyards, such as the now mythical Syrah that Costantino himself demonstrated can find an ideal habitat among the slopes of the Valle d’Aosta.

Remaining on the subject of wine, the extensive tasting of the Les Crêtes range confirmed the high level of quality achieved by this company, which has also made an important contribution to the growth of the Valle d’Aosta’s viticulture as a whole.

In fact, during the few days we stayed in Val d’Aosta, we had the opportunity to taste numerous wines from this region and we must admit that the level of quality has grown considerably along with the number of stakeholders involved in producing wine.

In addition to the aforementioned Syrah, a great deal of emotion is once again aroused with the Chardonnay Cuvée Bois, which – as Giulio Corti reminded us – was arose out of Costantino’s friendship with Luigi Veronelli and their shared passion for Burgundy. From their numerous travels in that extraordinary region in the 70s and 80s, Costantino’s desire to bring that tradition back to his homeland, the Valle d’Aosta, was born. And it must be acknowledged that it was an extraordinary intuition that continues to produce amazing results over the years and I don’t think I’m exaggerating by pointing out that it is one of the most elegant and characterful Chardonnays produced in Italy.

I also loved Nebbiolo Sommet that was created in Les Crêtes thanks to the important contribution made by the talented agronomist Federico Curtaz, who has a great deal of expertise in this grape variety. In addition, given Constantine’s friendship with numerous old producers located further down in the valley, the company has been able to make use of some of the best vineyards specifically suited for Nebbiolo, which in Valle d’Aosta, we recall, is traditionally cultivated with the name of Picotendro.

It is difficult to leave a company like Les Crêtes, because you feel enveloped in a unique atmosphere, where the mountain blends with the suggestive world of wine in an extraordinary way.

We knew that the visit to Les Crêtes would be a great opportunity to get to know one of the most interesting “mountain” wine companies in the world. But reality has also exceeded our expectations thanks to Elena, Eleonora and Giulio who have been ideal ambassadors not only for their company but also for this extraordinary region.

Date:  November 16, 2020
PREVIOUS PROJECT
The spirit of Oltrepò in an ancient monastery converted into a cellar and restaurant
NEXT PROJECT
An Italian salami
HOME
Italian Good Living - All rights reserved. Web Agency
To Top
We use cookies on our website to give you the most relevant experience by remembering your preferences and repeat visits. By clicking “Accept”, you consent to the use of ALL the cookies.
Cookie settingsACCEPT
Manage consent