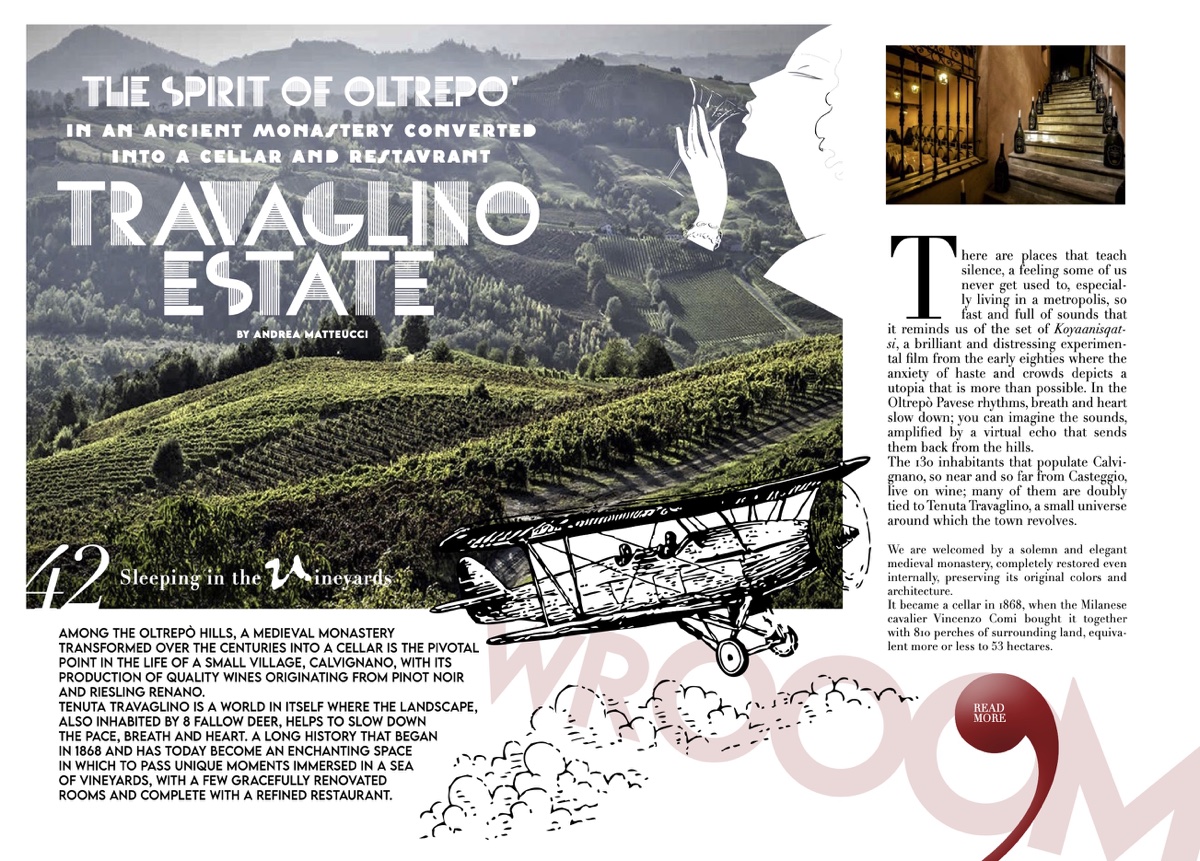 Among the Oltrepò hills, a medieval monastery transformed over the centuries into a cellar is the pivotal point in the life of a small village, Calvignano, with its production of quality wines originating from Pinot Noir and Riesling Renano. Tenuta Travaglino is a world in itself where the landscape, also inhabited by 8 fallow deer, helps to slow down the pace, breath and heart. A long history that began in 1868 and has today become an enchanting space in which to pass unique moments immersed in a sea of vineyards, with a few gracefully renovated rooms and complete with a refined restaurant.

There are places that teach silence, a feeling some of us never get used to, especially living in a metropolis, so fast and full of sounds that it reminds us of the set of Koyaanisqatsi, a brilliant and distressing experimental film from the early eighties where the anxiety of haste and crowds depicts a utopia that is more than possible. In the Oltrepò Pavese rhythms, breath and heart slow down; you can imagine the sounds, amplified by a virtual echo that sends them back from the hills. The 130 inhabitants that populate Calvignano, so near and so far from Casteggio, live on wine; many of them are doubly tied to Tenuta Travaglino, a small universe around which the town revolves. We are welcomed by a solemn and elegant medieval monastery, completely restored even internally, preserving its original colors and architecture. It became a cellar in 1868, when the Milanese cavalier Vincenzo Comi bought it together with 810 perches of surrounding land, equivalent more or less to 53 hectares. This is the first nucleus of the estate, until 1965 the one and only company that was gradually growing larger, but without any ambition to produce wine.

Many things changed from the mid-sixties when Vincenzo Comi, grandson of the cavalier, revolutionized Travaglino by transforming the ancient property into a cellar. He was responsible for the first zoning, the analysis and the choice of the most suitable plots to plant the best vines. The center of hospitality in Travaglino, the inn, was renovated, the first sign of a very specific desire to move into hospitality, complete and charming, without being excessive. The years that followed saw the redevelopment and modernization of the cellar: technology played a leading role, and the concrete tanks were replaced with modern temperature-controlled steel tanks. In 2013 the fifth generation became part of Travaglino: sister and brother Cristina and Alessandro Cerri Comi focus their attention on the quality of the wines and on the rationalization of the production process.

A new team of professionals has been established, led by the icon Donato Lanati and the oenologist Achille Bergami; today there are 80 hectares of vines, facing only south, characterized by clayey-calcareous soils resting on marl and sandstone. There are two main varieties in the cellar: Pinot Noir, in its countless nuances, and Riesling Renano, making up a total of 14 products on offer, with low yields for high quality. Each one different from the other in nose and palate, they are however united by common flavors. It is a family feeling that refers both to the deep bond that Travaglino has with the Oltrepò territory, and to the identifying character of the family. Found on every bottle, the coat of arms brings these sensations together, giving each wine prestige, territoriality and identifiability: it is the Cerri Comi DNA. It’s a genetic heritage that is also expressed in the desire to go beyond just the production and sales of wine to reach an equally personal concept of hospitality.

It’s a short walk through the vineyard to reach the inn. There are only a few rooms, furnished without unnecessary excesses, each one different from the next, situated in this ancient residence, renovated with grace and a touch of magic. Whichever way you look, hills, valleys and stillness; a slow car every half hour along the only road, nothing more. Here a dinner on the terrace portrays the spirit of Oltrepò in a different way: uncommon dishes, a choice which seeks to give a precise identity, that of the genetic makeup of Travaglino, to be the black sheep in the white flock of the other restaurants, pubs and trattorias that, from the lower Po Valley, climb the hills that embrace Travaglino, the 8 fallow deer that live in its park and the 130 souls in Calvignano.

Date:  November 16, 2020
PREVIOUS PROJECT
Giorgio Palmucci
NEXT PROJECT
Between heroism and high quality
HOME
Italian Good Living - All rights reserved. Web Agency
To Top
We use cookies on our website to give you the most relevant experience by remembering your preferences and repeat visits. By clicking “Accept”, you consent to the use of ALL the cookies.
Cookie settingsACCEPT
Manage consent