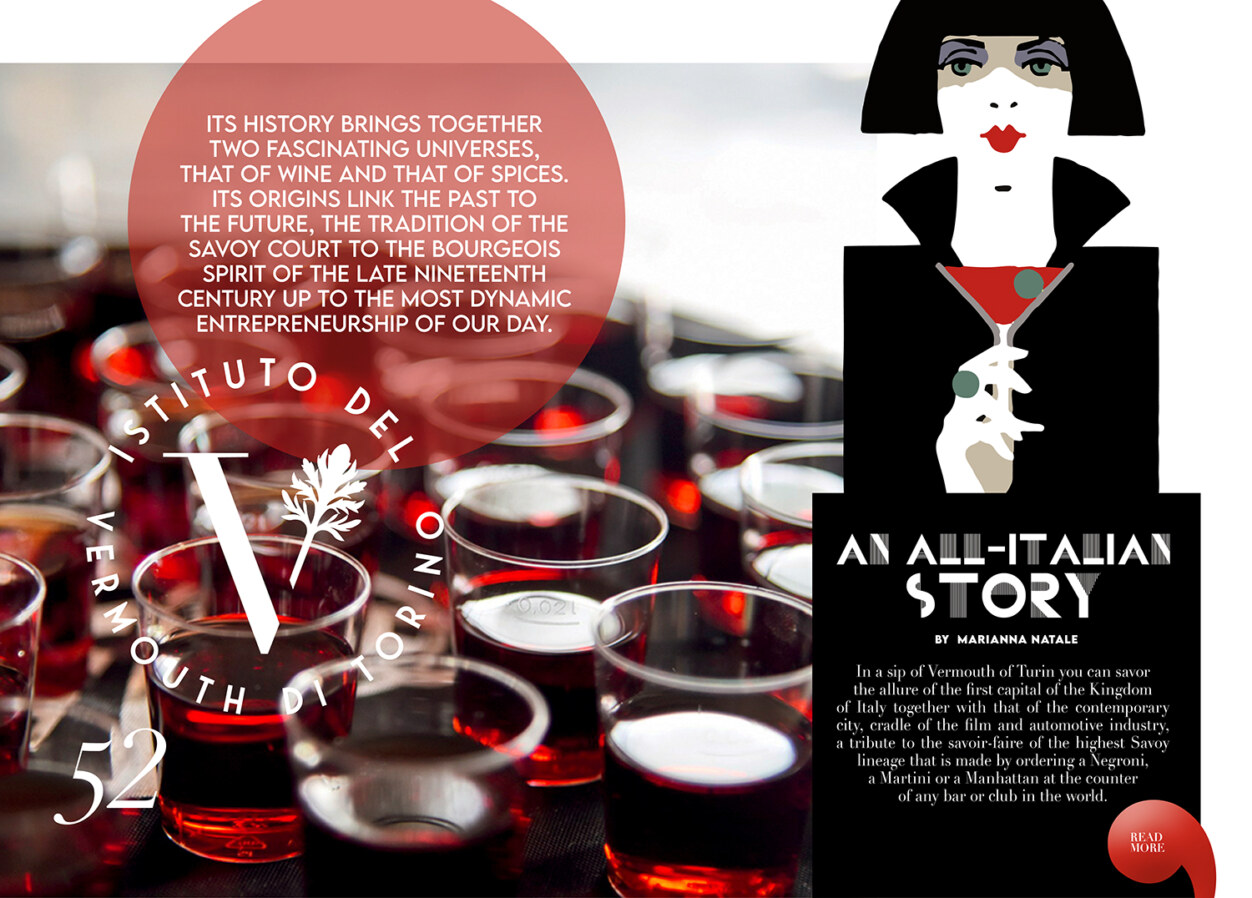 Its history brings together two fascinating universes, that of wine and that of spices.
Its origins link the past to the future, the tradition of the Savoy court to the bourgeois spirit of the late nineteenth century up to the most dynamic entrepreneurship of our day.

In a sip of Vermouth of Turin you can savor the allure of the first capital of the Kingdom of Italy together with that of the contemporary city, cradle of the film and automotive industry, a tribute to the savoir-faire of the highest Savoy lineage that is made by ordering a Negroni, a Martini or a Manhattan at the counter of any bar or club in the world.

Vermouth (vermouth, vermutte or vèrmot) is a wine, white or red, fortified and flavored, recognized as a traditional Italian food product, a definition that is simplistic in these terms compared to its great cosmopolitan appeal, being in fact a primary ingredient of many cocktails prepared by bar-tenders worthy of the title, who aren’t averse to offering it straight rather than mixed.

Vermouth of Turin is well-known for the tradition and historical significance of its production, and its fame is inextricably linked to Piedmont and Turin. In the eighteenth century a real aristocracy of “vermuttieri” (people who dedicated themselves to Vermouth) developed, who were capable of distributing their products, in various ways and means, with unimaginable results, acquiring recognition for their brands to such an extent that they were compelled over the years to develop new processing techniques, which have gradually combined with the older ones, continuing to uphold and enhance the production of Vermouth.

Inserted among the European geographical denominations since 1991, without, however, its characteristics or production processes having been indicated to distinguish it from the broader category “Vermouth” to which it belongs, Vermouth of Turin has been waiting for over twenty years for a production specification to be defined that is able to regulate and further elevate its image.

Today we have finally achieved our desired goal with the acceptance of the request to protect and recognize the Geographical Indication of the Vermouth of Turin / Vermuth of Turin, presented by the Piedmont region to the Ministry of Agricultural, Food and Forestry Policies and approved with decree no. 1826 of 22 March 2017.

“Vermouth of Turin – reads the decree – is the flavored wine obtained in Piedmont from one or more Italian wine products, with the addition of alcohol, flavored primarily by Artemisia together with other herbs and spices”.

The production area comprises the entire territory of Piedmont.

An important decree that led to the establishment of the Vermouth Institute of Turin, which includes among its ranks the brands of the leading producers found on today’s market: Berto, Bordiga, Del Professore, Carlo Alberto, Carpano, Chazalettes, Cinzano, Giulio Cocchi, Drapò, Gancia, La Canellese, Martini & Rossi, Giovanni Sperone, Vergnano and Tosti. The president is Roberto Bava and the vice president is Giorgio Castagnotti.

The Institute has set itself the goal of enhancing, promoting, and promulgating Vermouth of Turin on the markets through the synergistic work of all producers. An important cultural activity that will encompass initiatives for product presentations in Italy and abroad, along with thematic and in-depth meetings, seminars on the history of Vermouth of Turin and tasting courses.

Vermouth of Turin must have a color ranging from white to pale yellow to yellow amber and red: the individual characteristics are related to the chromatic contributions determined by the wines, by the flavorings and by the possible use of caramel. Fragrance is usually intense and complex, aromatic, balsamic, harmonious, sometimes floral or spicy. Flavor is soft, balanced between various components that can be bitter – induced by the aromatic characteristic of Artemisia – or sweet depending on the different types of sugars. Alcoholic content between 16% and 22%.

They can be extracted using available technologies using wine, alcohol, water or hydroalcoholic solutions as support.

Among the main raw materials of Vermouth of Turin we find the plants of the genus Artemisia, given the presence of absinthium and / or pontica species cultivated or harvested in Piedmont is mandatory.

For sweetening, sugar, grape must, caramelized sugar and honey may be used. Only caramel may be used for coloring.

The name may be integrated with the following words:

SWEET for products whose content is equal to or exceeds 130 grams per liter.

In the list of ingredients base wines may be referred to with the specific designations of origin or geographical indications if they represent at least 20% of the finished product. The product specification provides for Vermouth Superiore for products with an alcoholic strength of not less than 17%, made with wines produced in Piedmont equal to at least 50% and flavored even if not exclusively, with herbs – other than absinthe – grown or harvested in Piedmont.

Source: Decree 1826 of 22 March 2017 of the Ministry of Agricultural, Food and Forestry Policies

Date:  March 23, 2021
PREVIOUS PROJECT
Marchesi di Barolo, where it all began
NEXT PROJECT
Massimo Giletti
HOME
Italian Good Living - All rights reserved. Web Agency
To Top
We use cookies on our website to give you the most relevant experience by remembering your preferences and repeat visits. By clicking “Accept”, you consent to the use of ALL the cookies.
Cookie settingsACCEPT
Manage consent