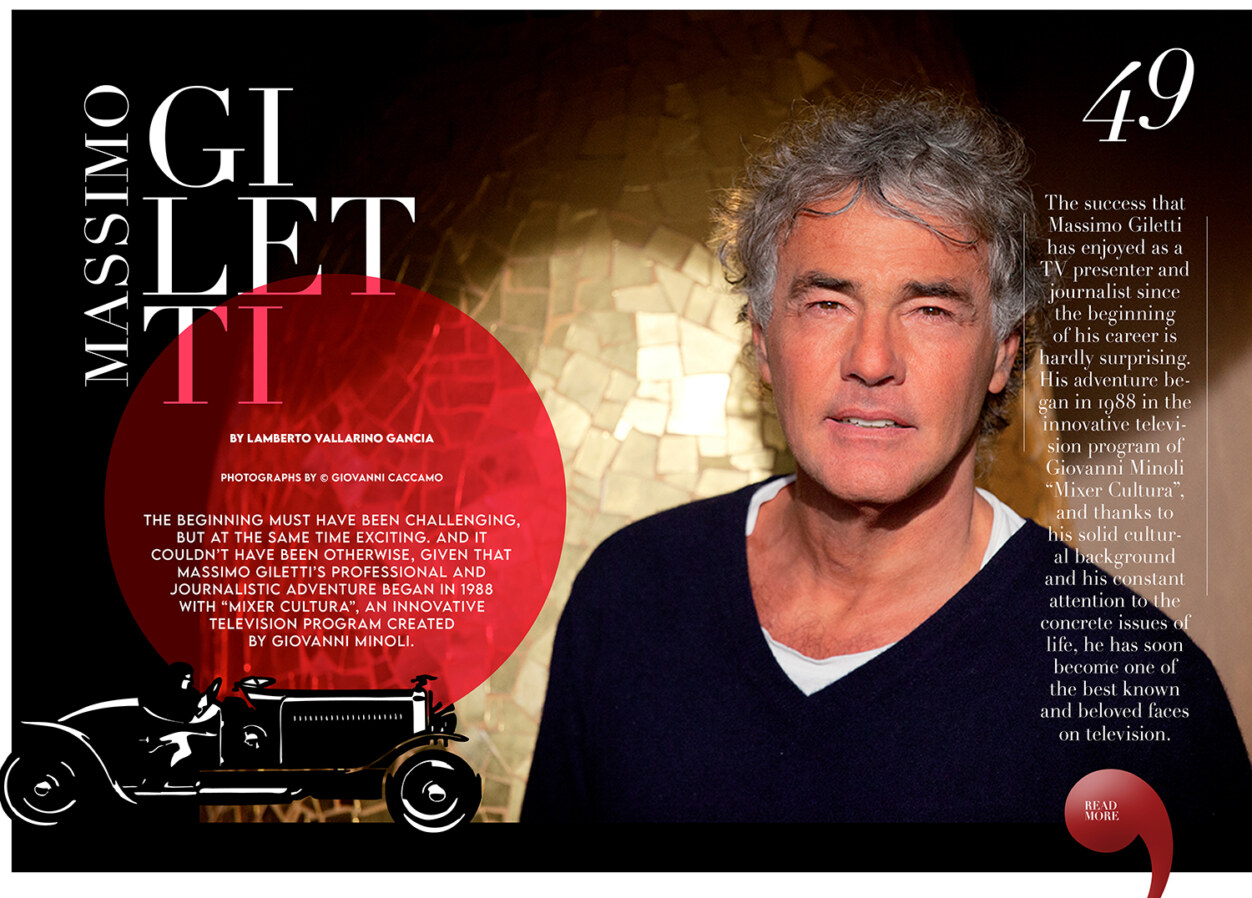 The beginning must have been challenging, but at the same time exciting. And it couldn’t have been otherwise, given that Massimo Giletti’s professional and journalistic adventure began in 1988 with “Mixer Cultura”, an innovative television program created by Giovanni Minoli.

The success that Massimo Giletti has enjoyed as a TV presenter and journalist since the beginning of his career is hardly surprising. His adventure began in 1988 in the innovative television program of Giovanni Minoli “Mixer Cultura”, and thanks to his solid cultural background and his constant attention to the concrete issues of life, he has soon become one of the best known and beloved faces on television. The fondness that he stirred in people was probably due to the ability of the TV presenter of “Non è l’Arena” to really know how to touch people’s hearts who appreciate him for being able to get to the core of problems, to call things by their name and, finally, to speak the same language as his viewers.

Certainly, that young man destined to become one of the most popular television presenters, capable of moving brilliantly on complex and often slippery terrain, was by no means a novice. And not only because he was supported by a solid cultural background culminating in a degree in Law with full marks after having attended the Liceo Classico, but also because his experience had made him attentive to the substance of reality, as he would later demonstrate in his own way of doing television.

It would be this attention that guided his steps. Not only at the beginning of his brilliant career, but also when success had made him one of the best known and most loved faces on the small screen:

« Often, we presenters are tempted to consider ourselves gods just because we appear on TV. Giving in to this temptation means that apart from being naive, you haven’t understood anything. From this perspective television, which is the projection of an image, is likely to be a long way from reality.

Reality is made up of real people, of daily experiences, of tangible aspirations. All things that television, in its proposing images moved by a frenetic and compulsive flow, is likely to lose ».

If you let all the depth of these words resound, the success of Giletti as a presenter and as a journalist is not surprising. In his continuing and genuine relationship with life, never losing touch with reality, perhaps lies the secret of approval – not infrequently tending to affection – that surrounds the figure of the current presenter of “Non è l’Arena”. Far from any elitist cliché, also favored by a spontaneous alienation to the tortuous character that now often characterizes television narration, the style with which Giletti manages his programs seems to display a capacity to reach the people. Who appreciate him precisely for the spontaneity in which he manages not to hide problems, to call things by their name and, ultimately, to speak the same language as his viewers.

Where does this ability to fascinate the public come from; capturing their mood without indulging their most negative traits and guiding them instead towards constructive perspectives? Perhaps from Giletti’s ability to escape the seductions of acclaim, rooted in those values that have been been transmitted by his family:

«Success can become dangerous and the antidote to the risk of becoming its prisoner is embodied in  the family fabric in which you grew up.

How many times, especially in the moments when I was at risk of letting myself be dominated by success, have I managed to reduce its charm by thinking back to the words of my father and mother when I was a child and a boy. It is precisely these words that have taught me that the esteem and affection of the public must be won day after day, without ever giving up who I am».

It must have been these teachings that guided the young Giletti to convince Giovanni Minoli to hire him in the editorial office of “Mixer”; to allow him to play increasingly prominent roles in important television formats; to allow him to become a television presenter so prestigious that he was called to present Youth Day in Loreto, wanted by Pope Wojtyla, in ’95, and, subsequently, the extraordinary Telethon marathons; to reach ever-increasing audiences, from 2004 to 2016, with the dynamic program “L’Arena”, broadcast on Sunday on RAI1; to reinvent the transmission “Non è l’Arena” in a short time, after having been unexpectedly liquidated by the first public channel, a format capable of rapidly becoming a point of reference in the professionally crowded LA7 schedule.

Once the uncertainty of the network change had passed, Giletti had nothing to do but celebrate. Which he certainly did – and I’m talking about it as a friend who has known him for a long time – drinking a good Italian sparkling wine on the beach in front of a bonfire, just as he did for the first time as a young man in Liguria gazing at the moon to the sound of a guitar.

Or perhaps preferring a Vermouth, enjoyed with a little ice in a special crystal glass.

Just as his grandmother had taught him – and it is no coincidence that this was also learned in the family. And she wasn’t just any grandmother, but a personal friend of the Spanish Infanta, Maria Cristina of Bourbon, and of Ernest Hemingway. Who, incidentally, never failed to serve a Vermouth when he went to visit her, for which he was obviously crazy.

Date:  March 23, 2021
PREVIOUS PROJECT
An all-Italian story
NEXT PROJECT
ROSSORUBINO
HOME
Italian Good Living - All rights reserved. Web Agency
To Top
We use cookies on our website to give you the most relevant experience by remembering your preferences and repeat visits. By clicking “Accept”, you consent to the use of ALL the cookies.
Cookie settingsACCEPT
Manage consent